Home / WORLD / Trump decries one of ‘greatest defeats in American history’ amid Afghan collapse, calls for Biden to ‘resign in disgrace’

Trump decries one of ‘greatest defeats in American history’ amid Afghan collapse, calls for Biden to ‘resign in disgrace’ 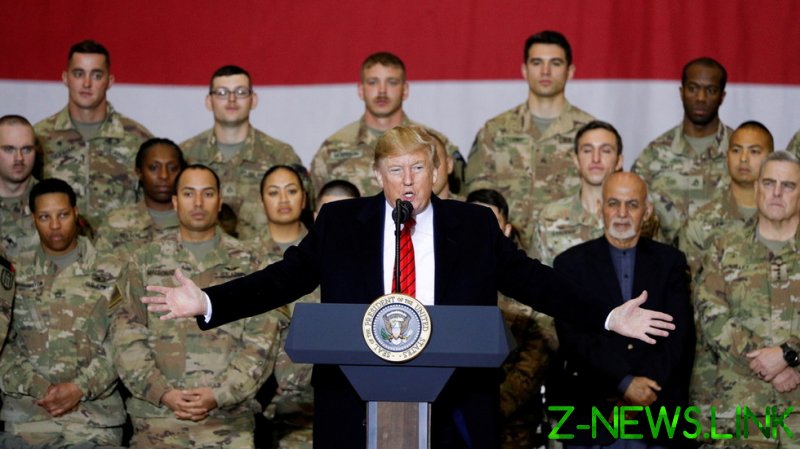 “What Joe Biden has done with Afghanistan is legendary,” Trump said on Sunday. “It will go down as one of the greatest defeats in American history.”

Trump went on to say in another message that Biden should “resign in disgrace for what he has allowed to happen to Afghanistan, along with the tremendous surge in Covid, the border catastrophe, the destruction of energy independence and our crippled economy.”

“It shouldn’t be a big deal because he wasn’t elected legitimately in the first place,” Trump added, referring to the allegations of election fraud in the US presidential elections he and his supporters have levelled against the Democrats. The courts have so far rejected dozens of Republican lawsuits challenging the elections.

The statements came one day after Biden essentially blamed Trump for the Taliban’s overwhelming onslaught, saying his predecessor’s administration cut a deal that left the Islamist group in its strongest military position since 2001 and demoralized Afghan government forces.

And yet, Biden had expressed confidence that his own withdrawal plan would go smoothly and said in July that it was “highly unlikely” that the Taliban would overrun the country and retake control. Also last month, he said there was no chance of a scene similar to the 1975 fall of Saigon to North Vietnamese forces, when US embassy staffers had to be plucked from the rooftop by helicopter.

Sunday’s fall of Kabul to the Taliban, coming two weeks before the US military is scheduled to complete its withdrawal from Afghanistan, proved Biden wrong. Even the embassy evacuation was Saigon-esque. At least two CH-47 Chinook helicopters were seen evacuating US embassy staff on Sunday. Afghan President Ashraf Ghani fled the country, reportedly to neighboring Tajikistan.

Biden critics pointed out his silence amid the tumult. CNN said the president is expected to address the nation about the Afghanistan crisis “in the next few days.”

Trump said on Saturday that his withdrawal plan would have ensured an orderly exit, and his administration established a “credible deterrent” that ensured the Taliban “would never dream” of seizing the US embassy or providing a base for terrorist attacks against America. He said Biden instead “ran out of Afghanistan.”

“The Taliban no longer has fear or respect for America or America’s power,” Trump said. “What a disgrace it will be when the Taliban raises their flag over America’s embassy in Kabul. This is a complete failure through weakness, incompetence and total strategic incoherence.”

US House Speaker Nancy Pelosi (D-California) suggested on Sunday that Washington’s “credible deterrent” stands strong under Biden. “The president is to be commended for the clarity of purpose of his statement on Afghanistan and his action,” she tweeted. “The Taliban must know the world is watching its actions. We are concerned about reports regarding the Taliban’s brutal treatment of all Afghans, especially women and girls.”

Conservatives blasted Pelosi for her apparent disconnect from reality. Kassy Dillon, founder of the Lone Conservative website, said Pelosi should be ashamed for defending Biden amid the Afghan collapse. “How dare you call for Biden to be commended as Americans are fleeing for their lives right now while the Kabul airport is under fire,” she said.