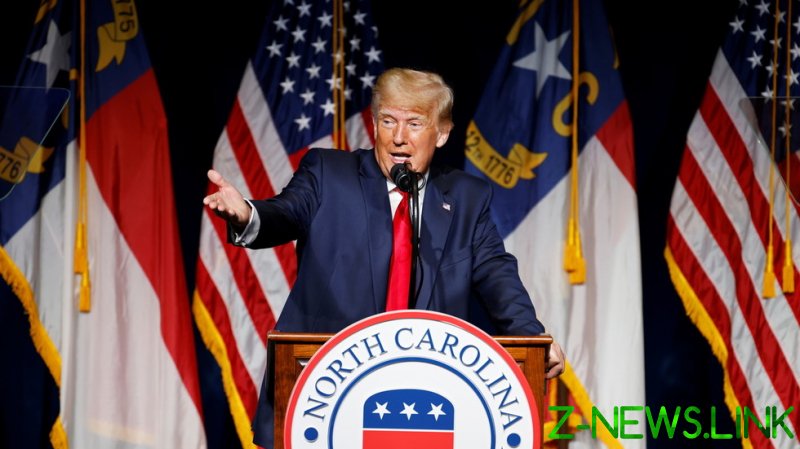 Footage from Trump’s North Carolina speech quickly spread across social media over the weekend, but much of this content did not include a whole lot of the former president talking. Instead, most posts on Twitter seemingly focused on the front of his pants, which appeared to not have a zipper, leading many to claim he was wearing his pants backwards, which quickly helped terms like “#Trumppants” and “#TrumpIsNotWell” to trend on social media.

As the debate over a man’s pants raged on, some, including ‘Tickled’ filmmaker Dylan Reeve, dove in to attempt to bring some clarity.

“God, I hate to do this, but I think the ‘backwards pants’ conclusion is wrong. Not sure if it’s deliberately manipulated or a compression artifact, but still photos from the event suggest his pants were normal,” he tweeted along with pictures of Trump from the event that appeared far more normal than the other images shared of him.

The director would go on to conclude that the pants images were actually not intentional fakes – and also not backwards – but simply an awkward visual moment created through “compression, a subtle fly in the pants and low dynamic range in the video recording.”

More conservative users poked fun at the trends, noting deep-dive discussions on the former president’s pants may show just how much his most vocal critics “miss him,” while others pointed out that such trends related to a Democrat like Joe Biden would be banned by platforms such as Twitter.

During his speech, Trump hit on many familiar topics, including taking digs at political enemies such as Dr. Anthony Fauci – “not a great doctor, but he’s a hell of a promoter” – and claiming the 2020 presidential election was rigged against him, which he described as “the crime of the century.” He continued blaming China for Covid-19, even going so far as to say that the country owed “reparations” for damage from the virus.

“The time has come for America and the world to demand reparations and accountability from the Communist Party of China,” he said.

The former president also blasted Facebook CEO Mark Zuckerberg and the company’s recent announcement that it was banning Trump for two years.

“They say they may allow me back in two years. I’m not too interested in that,” he said, going on to blast Big Tech for “shutting down an entire group of people.”