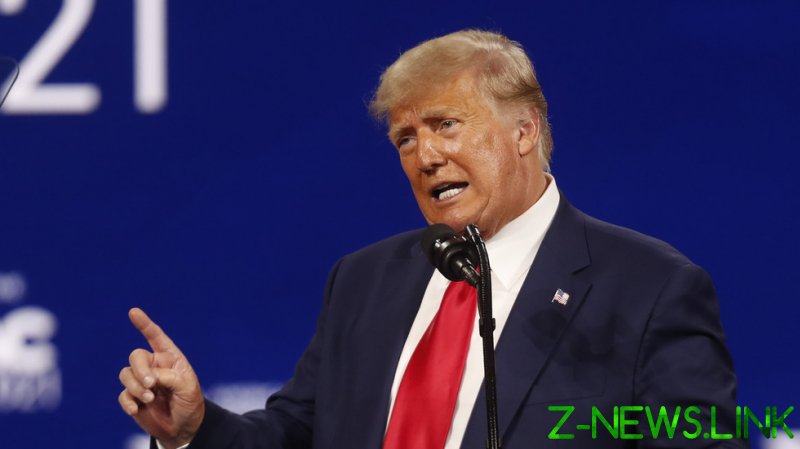 “The time has come to break up Big Tech monopolies and restore fair competition,” Trump said Sunday at the CPAC conference in Orlando. “Republicans, conservatives must open our platforms and repeal section 230 liability protections,” he added.

While in the past the public had a chance to hear both sides of the argument before making an informed decision, the big tech censorship disproportionately targeted conservatives, depriving them of the right to be heard, Trump argued.

You would win, you would lose… But now there is no debate, because they refuse allow our side to even speak or to be heard

If the power of the big tech cannot be curbed on the federal level immediately, Trump urged “every state in the union where we have the votes” to “punish Big Tech with major sanctions whenever they silence conservative voices.” He noted that Texas and Florida “are doing this” already.

Florida Governor Gov. Ron DeSantis has been championing a bill seeking to rein in tech companies by allowing users to bring a “cause of action” against platforms violating Florida law. The bill, if becomes law, would bar platforms from rapidly changing their policy and enforcing it selectively against users. Under the law, consumers would have the right to “opt-out” from algorithms that shadowban certain information. “As these companies have grown and their influence expanded, big tech has come to look more like big brother with each passing day,” DeSantis said, as he voiced support for the bill in early February.

Texas Governor Greg Abbott earlier this month announced his office was working on a bill to “prevent social media providers like Facebook & Twitter from cancelling conservative speech.” The bill will reportedly give the state more leverage to regulate social media companies, and allow Texans, yanked off social media platforms over political or religious views, the right to take Twitter and Facebook to court.

Trump made his comments on Silicon Valley giants and the censoring of conservative voices – including his own social media accounts – after calling for reforms to ensure “fair, honest and secure elections.” For instance, he said, the US must end mass mail-in voting, require voter identification, verify that each voter is a legal citizen and provide chain-of-custody protection for all ballots.

“All the election-integrity measures in the world will mean nothing if we don’t have free speech,” he stressed.