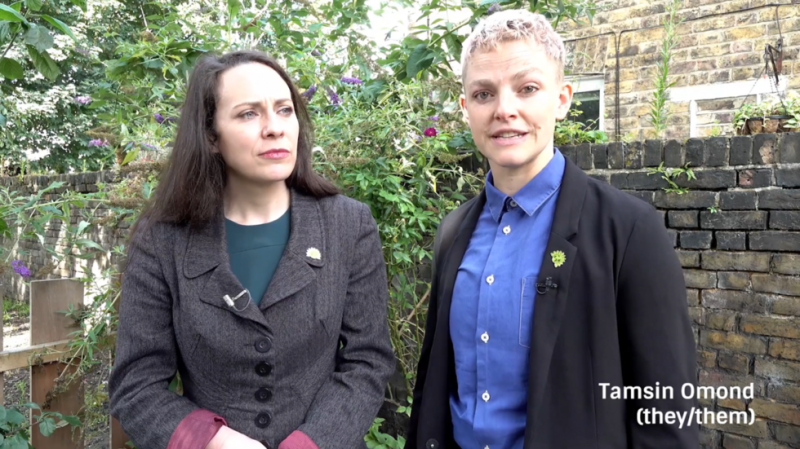 Deputy leader Amelia Womack has picked Tamsin Omond as her running mate to head the Green Party of England and Wales. Both are long-time environmental activists, as befits the party’s agenda. But what makes Omond stand out among the candidates for co-leadership is gender identity: “trans nb nature lover,” according to Omond’s Twitter bio

The Greens recently went through an internal struggle which culminated in the resignations of the previous co-leaders, Jonathan Bartley and Sian Berry, which happened in July just 10 days apart. The details are sketchy, since party rules forbid members from criticising each other in public, but Berry’s farewell statement made it clear it was about trans rights.

Sources claim that “minority transphobic views” among the Greens was a major problem for them, pointing to a statement by former deputy leader Shahrar Ali as an example. Made last year, it declared womanhood to be a biological trait, and stated: “These facts are not in dispute nor should they be in any political party.”

The bid, however, will have to pass the test of the Green Party’s election diversity rules, which require candidates for co-leadership to be of different genders. The competition includes Tina Rothery and Martin Hemingway, who announced their candidacies in late July, and potentially other challengers.

Cleo Lake, the former lord mayor of Green stronghold Bristol, indicated she may run. Ali, who unsuccessfully ran for leadership twice, is considered a likely candidate as well. The window for nominations closes on August 17, with voting by over 50,000 party members scheduled for September.

The change in leadership comes following strong results in the May elections, with the party winning 99 additional seats in local councils. Nationally, it remains a minor party with a single seat in the House of Commons. The party hopes its profile will grow further with the threat of climate change becoming more prominent in the public eye, though it remains to be seen if pairing it up with identity politics for internal consumption is a winning strategy.