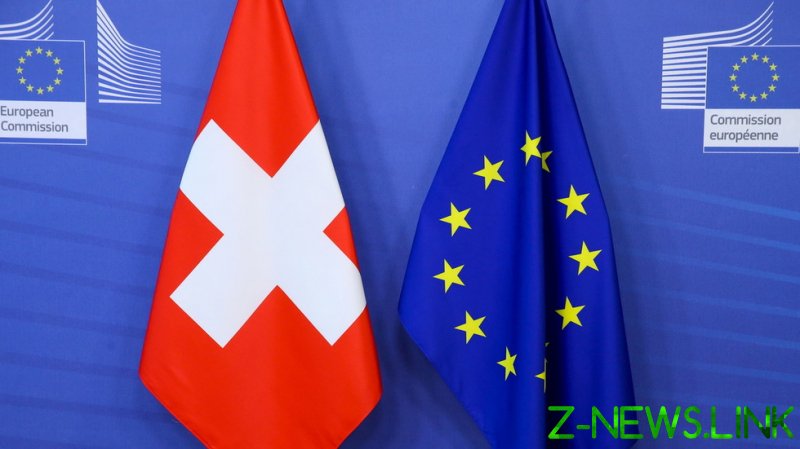 Switzerland today is celebrating its breakaway status from the European Union, having finally tired of the bullying and rhetoric from Brussels and walked away from a proposed framework arrangement after seven years of negotiations, preferring to go it alone in Swissexit.

Never a full member of the EU, that decision leaves its relationship with Brussels facing an uncertain future. The two are bound together by a collection of 120 bilateral agreements that, one-by-one, will lapse over time. However, choosing to walk away from deadlocked negotiations was, it seems, not so hard after all.

Parliamentary leader of the Swiss People’s Party in the National Council Thomas Aeschi MP told RT.com exclusively,“Most people in Switzerland are quite happy with the decision that was taken. However, it is only a battle so the war is not won.

“Because in Switzerland, there are strong forces that will continue trying to nudge us towards closer integration into the European Union.”

Aeschi suggested those forces, the conservative parties and Europhile Social Democrats, would seek to use the three-week summer session of Switzerland’s National Council, which starts on Monday, to explore ways to rescue the negotiations.

He pointed out that any outcome would need to face a people’s referendum, which, having been suggested by a government that had negotiated itself into the stalemate in the first place, would most likely fail.

But what does this all mean? If Switzerland is not an EU member then surely it was free to do as it chooses?

And that was a major sticking point. But this should have come as no surprise to EU negotiators; after all, it was one of the key objections that Britain had in its negotiations over Brexit, but it seems backing off an intransigent approach was not a lesson they learned.

While these broader concerns are felt by the Swiss, at the negotiating table it was an impasse over three key areas – the protection of workers’ salaries, citizens rights and state aid – that did for the agreement.

“It looked like we were reaching a tipping point last November,” Aeschi said. “That was just around the time another new negotiator – number five, a woman this time, Livia Leu – was sent to Brussels to find an agreement within those three key areas.

“Eventually she came back, a bit similar to British Prime Minister (David Cameron) at the time, with empty hands. She couldn’t get any concessions in any of those three areas and she travelled around six times to Brussels in four or five months and there was really no progress. This led to the realisation in the government that there was no chance of having a satisfactory agreement.”

With clear echoes of Britain’s divorce from the bloc, an imperious Brussels once again massively overplayed its hand and the Swiss eventually tired of the bullying, the rhetoric and the threats. They laid their cards on the table, stood up and walked away. That’s seven years of talks that amounted to nothing. Nichts. Rien. Niente.

Aeschi said that following the abandonment of discussions, “People will see the EU’s real face. They will understand that the European Union may not be as democratic as it says it is and that it is not truly interested in what the people want.”

While Brussels will certainly try to sell this loss as a missed opportunity for Switzerland, it will find it hard to ignore the landlocked nation at the heart of Europe. There are 1.4 million EU citizens living in the country, which also exported about €160 billion of goods and services to the EU last year, making it the bloc’s fourth-largest trading partner, behind the UK, China and USA.

As confident Aeschi said, “We have good relations with most countries and we have a very strong industry. We have a budget that is more or less in balance and we have a currency that is fairly strong so I’m not too afraid about our position.”

And so the European Union’s dream of luring Switzerland into its political web, of ‘ever closer union’, lies in tatters, a victim of the very same patronising arrogance that so infuriated British negotiators, which has proven after all not to be an aberration but the high-handed way it chooses to do business.

Let’s leave the final word for now to an Oscar Wilde-style observation that might have gone like this – were those in Brussels ever to listen: To lose your third-largest trading partner may be regarded as a misfortune; to lose your fourth-largest looks like carelessness.