Home / WORLD / Today I saw Syrians dancing and celebrating life, and a return to peace – but, of course, the Western media won’t report that

Today I saw Syrians dancing and celebrating life, and a return to peace – but, of course, the Western media won’t report that 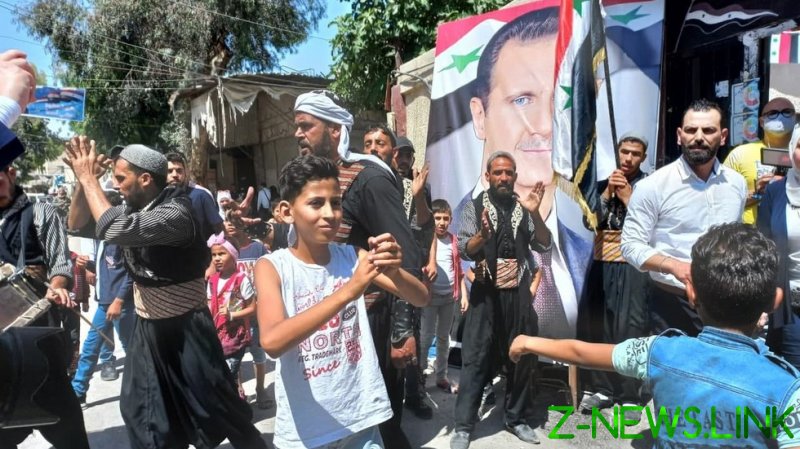 After Eastern Ghouta’s liberation in 2018, the Western media predictably went silent on the return of internally displaced Syrians and the rebuilding that had occurred. Today, in towns in the region outside the capital Damascus, behind dusty, battered metal shop shutters, I saw glossy new windows and even more rebuilding than I had when I was here in 2018.

In Douma, I saw lovely, smiling children, excited to practise their English with me. Given that they were born during the war and lived under the horrifically savage rule of the rebel groups Jaysh al-Islam and Faylaq al-Rahman, and their co-terrorists, their exuberance was remarkable. The traumas they endured they have either deeply buried within or miraculously healed from.

Since both the media and leaders in the West made such a big deal over the Douma chemical hoax, it was particularly rewarding to see life in the streets again.

Syrians in Eastern Ghouta were put through a hell that most of us, living safely far from war, cannot begin to fathom. I had seen their tortured faces shortly after their liberation in 2018. That made seeing them smiling, dancing, and celebrating the presidential elections today incredibly moving. The difference between then and now was like night and day.

Some were surprised when I posted videos on social media of a Syrian singer and orchestra performing at the Damascus Opera House two nights ago. Many assume the country has been completely destroyed, others are just unaware that it has a rich culture that hasn’t died, in spite of a decade-long war waged by the West.

Until the liberation, however, Syrians in Damascus risked being maimed or killed every time they went to work, to school, to the market, or even while they remained at home, when terrorist mortars and missiles rained down from Eastern Ghouta.

Back in 2014, leaving behind the hospitality of the small hotel I was staying in near the gate of Bab Sharqi, the Old City’s East Gate, I drifted over to a cluster of tables across from the beautiful Zaitoun Greek Orthodox cathedral and beside a closed restaurant. But instead of working on my laptop, as I’d intended, I ended up getting into a conversation with the owner of that restaurant, now called the Abu Zolouf bar.

As Abu Shadi and I spoke, terrorist-fired mortars fell in nearby districts. I wrote at the time: “As it happened, I got two of four mortars on audio. The first occurred around 7:05 pm, which Abu Shadi estimated to be 200 metres away. His friend corrected him saying it was only 50 metres away (also about 20 metres from my hotel). Roughly 10 minutes later, the second mortar. There were two other mortars within half an hour. SANA news reported the injury of 17 civilians.”

Our conversation became about the incessant shelling, where the latest mortar had fallen, and his near-death experience with one.

“Two times mortars landed outside my restaurant. One would have killed me, but I went inside just before,” he said, pointing to a spot on the ground next to the door. He lamented the loss of business as much as the threat posed by the mortars.

The other night, I visited the restaurant with a friend. Seeing Abu Shadi, we sat down with him and chatted about those days. Now, his hostelry is open and well frequented, guests sitting under light-strung olive trees enjoying the early summer evenings. 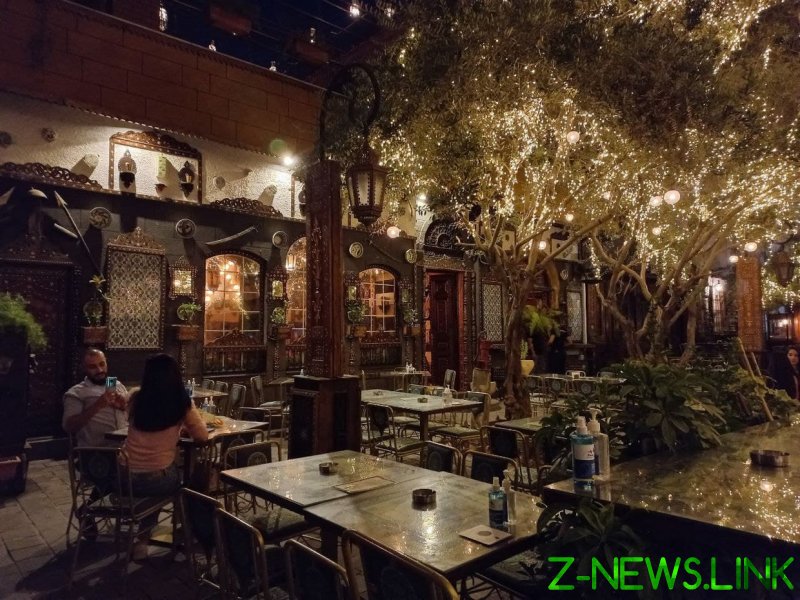 Also in 2014, one afternoon, wishing to escape the blazing sun, I leaned against the wall encircling the Old City, looking towards Jobar, then occupied by terrorist factions, roughly a kilometer away. As I wrote at the time, while I chatted with a friend, “bullets whizzed past me, half a meter to my right, to my left. Everyone in the vicinity jumped up and ran, most looking panicked. We ran for about 50 meters, to a point which was apparently out of the terrorists’ range. One woman, hyperventilating and unable to stand, took a good 10 minutes to calm down, repeatedly making the sign of the cross as she wheezed. Later, I chatted with a man selling spinach patties, mentioning that I was surprised the bullets had reached the point where I’d been sitting. ‘They reach as far as here,’ he said, from his hole-in-the-wall bakery another 200 metres from where I’d been sitting.”

My encounters with mortars and their victims were many over the years, including seeing numerous children maimed and with critical injuries from the terrorists’ shelling, many ancient Damascene houses partially destroyed by it. 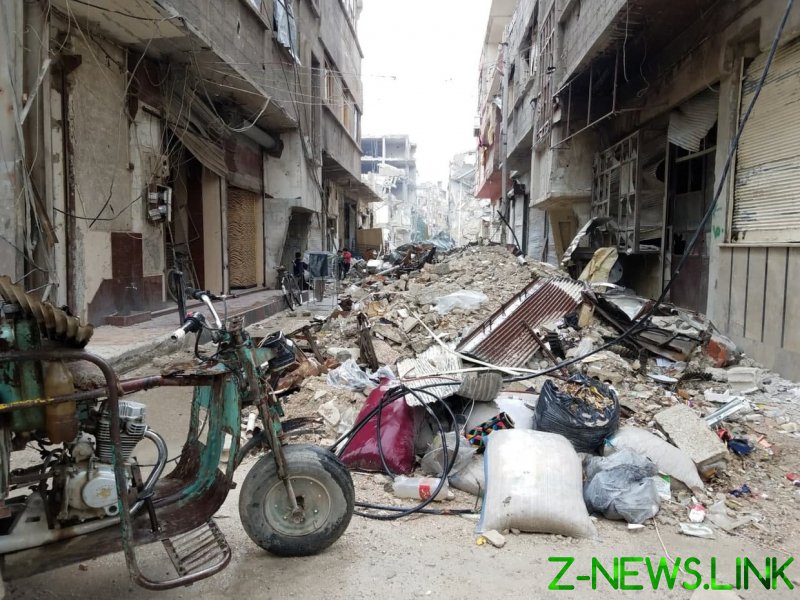 In 2018, I interviewed the supremely talented violinist and composer, Raad Khalaf, who is also a founder of the all-women Mari Orchestra. Afterwards, we chatted and he mentioned that the shelling had reached the Higher Institute of Dramatic Arts where he taught, near the Opera House.

He told me that the year prior, terrorists had attacked the area with some 37 bombs in one day.

“The students had to stay inside for eight hours – you couldn’t go outside because we didn’t know when or where the next bomb would fall. One student went outside and was killed. Here we lived five difficult years.”

On Monday this week, I went to the Opera House to hear Syrian singer Carmen Tockmaji and the orchestra accompanying her perform. The auditorium was only half-full but lively, everyone evidently enjoying the singer’s talents.

I was surprised to learn later that a front-row ticket cost just 2,000 Syrian pounds (80 US cents), a second-class ticket 1,500 (60 US cents), and a third class ticket 1,000 (40 US cents). Nonetheless, despite the low price, Syria’s poorest can’t afford this, largely because of the brutal sanctions on the country that decisively affected the currency, causing hyperinflation – an intended consequence of the cruel and immoral sanctions leveled against the Syrian people.

I wrote last year (and before) about how these sanctions directly affect civilians: “On June 17, the US implemented the Caesar Act, America’s latest round of draconian sanctions against the Syrian people, to ‘protect’ them, it claims. This, after years of bombing civilians and providing support to anti-government militants, leading to the proliferation of terrorists who kidnap, imprison, torture, maim, and murder the same civilians. Sanctions have impacted Syria’s ability to import medicines or the raw materials needed to manufacture them, medical equipment, and the machines and materials needed to manufacture prosthetic limbs, among other things.”

But sanctions have yet another brutal effect: they wreak havoc on the economy. A May 3, 2021 opinion piece by Abbey Makoe on the website of the South African Broadcasting Corporation noted: “Electricity rationing in Syria has reached its highest levels due to the government’s inability to secure the fuel needed to generate electricity. This is mainly due to the damaging international economic sanctions led by the Western powers, including the IIT [Investigation and Identification Team of the Organisation for the Prohibition of Chemical Weapons] protagonists France, UK and the US. The value of the Syrian pound has crumbled to almost nothing. The Caesar Syria Civilian Protection Act of 2019 … is credited with bringing about starvation, darkness, plague, misery, robbery, kidnappings, increased mortality rate and the certain destruction of a nation that was once a beacon of hope across the Middle East.”

The misery is real, and Syrians are indeed suffering, many unable even to feed their families properly.

Speaking of Opera House performances may seem trite in light of the economic suffering, but the fact that productions such as this do still occur in Syria is another indication that the West’s change-of-government project has failed, despite its 10 years of waging war in Syria.

Seeing this concert just before the presidential elections was moving and poignant. As Carlos Tebecherani Haddad, a Syrian-Brazilian friend I met in 2014 when mortars were raining down around us, wrote: “Celebrating life, victory over foreign aggression, rebuilding, the strength of Syrian roots, presidential elections and the bright future of the Syrian nation.”

That indeed is what I’ve seen in Syria, including today in Douma, where Syrians amassed to vote. Yet there is much to be done, particularly when it comes to rebuilding the infrastructure – especially as oh-so-benevolent America and its allies, in sanctioning the Syrian people, are directly preventing this.

So, if you’re still pointing a finger at the president and the army, turn that finger back at your governments, ye in the West. They are the cause of the destruction and death in Syria, and they hinder an otherwise achievable return to peace and normality.