Home / WORLD / Time’s up: Lionel Messi and Cristiano Ronaldo must move on this summer if they really want to win the Champions League again

Time’s up: Lionel Messi and Cristiano Ronaldo must move on this summer if they really want to win the Champions League again 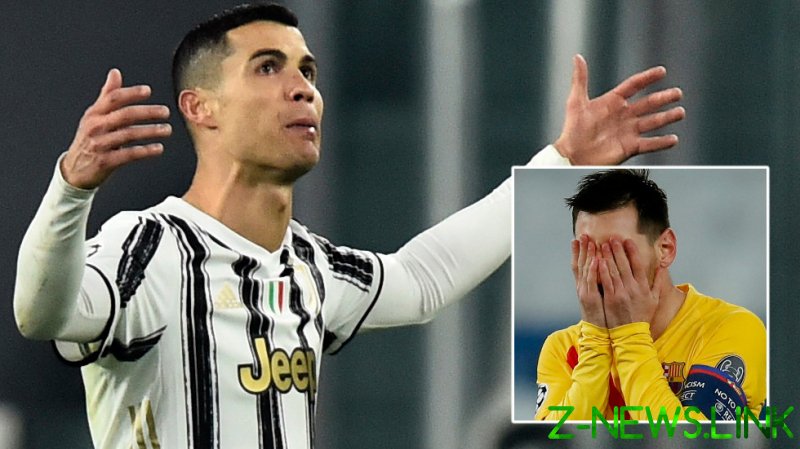 Juventus were only knocked out on away goals. Barcelona would only have been two goals down if Messi’s late first-half penalty had gone in rather than hit Keylor Navas and the crossbar.

Ronaldo should have scored from a free header. PSG should not have been awarded the penalty from which Kylian Mbappe put them 5-1 up on aggregate at the Parc des Princes.

There are, as usual, plenty of ifs, buts, coulds, shoulds and woulds around Barcelona and Juventus’ latest calamitously premature ends to their Champions League campaigns.

No matter how tangible the parallel universe in which they progressed seems to some, Messi and Ronaldo are both out at the round of 16 stage for the first time since 2005.

Whether either of the modern greats could have performed better individually seems as irrelevant a question as quibbling over VAR decisions and inspired goalkeeping in the ties.

Neither of these traditional contenders deserved to reach the quarterfinals. Barcelona were battered in the first leg against Paris courtesy of defensive naivety against Kylian Mbappe’s pace in a performance bearing all the hallmarks of the hopeless defeat to champions Bayern last season, the conclusive measure of how far they had fallen.

Juve arguably lost the tie in the opening minutes of either half in the first leg against Porto. No misfortune or narrow margins can make up for not being switched on upon entering the pitch.

That fatal lack of focus and sharpness is the responsibility of coaches and collective spirit. It is an indictment of the crisis of character facing both clubs that they could not provide a platform from which Ronaldo and Messi could have made the difference that would have sent them to the next round.

Anything other than grasping for optimism would be an effective letter of resignation from coaches Ronald Koeman and Andrea Pirlo, who only need to look at the swift departure of Maurizio Sarri from Juve last season to appreciate the consequences of a preference for realism rather than obstinate blue sky thinking.

Koeman says Messi knows that Barca have a bright future. That seemed somewhat evident in Paris, but it was as much a reminder of how they routinely used to perform as it was an exception to the rule over recent seasons, and difficult to properly analyze in the context of opponents who did not need to attack them.

Barca will take comfort from the welcome return of fluidity and confidence they showed in the second leg, just as Pirlo can plausibly claim his Juve players gave him everything in the final hour of their tie, reacting admirably to force themselves back into the reckoning.

The managerial newcomer has been involved in enough crucial Champions League matches as a player to know that, really, there can be no excuses for losing to opponents ranked as far below Juve as Porto are. But the worst aspect of the defeat was how obvious it became that Sergio Conceicao had inspired every reserve of determination, energy and togetherness from his resolute side.

Had Juventus even done the basics right in those opening moments of the first two halves, let alone performed above par, they would have proved Porto to be the gatekeepers that they look and avoided a repeat of the drama with which they exited the competition last season.

So what do Ronaldo and Messi do now? The only certainty about their clubs is that they will still be in transition this time next year, while the likes of PSG, Manchester City and Real Madrid will be ready to challenge without trying to work out who they are and what their strategy is.

There has always seemed something patronisingly trite about saying that it is a shame when the duo do not make the latter stages, yet the closer they both move towards retirement – or at least a notable long-term cessation of form – the more you hope that they won’t spend their final few seasons in the competition attempting miracles in isolation, only to end up being the subject of more always-next-season post-match press conferences.

There are no guarantees, but Barcelona and Juventus are big names rather than present threats in the rearview mirrors of Europe’s elite right now, showing few signs of catching up in the next few seasons.

Ultimately, if their designs on rebuilds are sincere, they may find them easier to achieve without a talisman around whom tactics must forever be drawn to the distracting sound of constant transfer rumors.

For the rest of the season, their uphill task to win their domestic leagues is the only problem. There are deeper issues to ponder once that is settled, none of which are likely to be solved in time to re-establish themselves in Europe within the remaining career spans of their two best players.