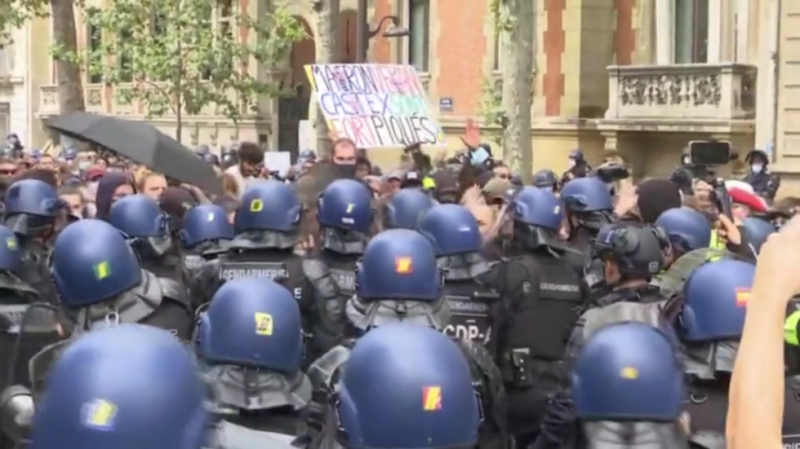 A huge march was held in Paris, where participants were accompanied by a massive police presence, live footage from RT’s video agency Ruptly shows.

The protest has taken place without any major incident so far, with police and marchers only engaging in minor pushing along the route. At one point, law enforcement could be seen pepper-spraying protesters who tried to push against the police line.

Large protests have also been staged in other cities across the country. A massive column of protesters marched through the streets of the southwestern coastal city of La Rochelle to condemn the plans for a health pass.

Another massive protest was held at the northern French city of Lille, with footage from the scene showing the city center flooded with a sea of disgruntled demonstrators.

Some 200,000 protesters were expected to hit the streets of French cities, according to local media reports, citing police sources. So far, French law enforcement has not released any official estimates on the scale of the ongoing protests.

The latest round of protests, which have rocked the country for the past few weeks, comes after France’s top court deemed most of the controversial legislation package to be constitutional. The legislation, approved by the court on Thursday, is expected to come into force on Monday.

The court shot down several provisions, but greenlit the most controversial ones, including the implementation of mandatory health passes for the general public, which will be required to visit most public venues. The legislation also implements mandatory coronavirus vaccination for frontline healthcare workers and some other categories of French citizens.

While critics of the legislation have accused the government of trampling on civil rights and even sliding towards a “dictatorship,” the authorities have insisted that the package is designed only to encourage vaccination.