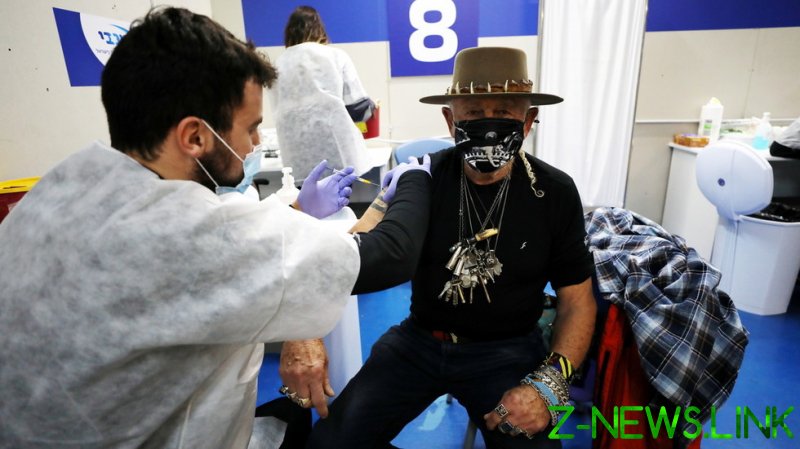 Some 189,000 people were tested for Covid-19 after being vaccinated, with 6.6 percent getting a positive result, according to ministry data reported by Israeli outlets. The majority were apparently infected shortly after receiving the first jab of the two-part vaccine – a period when the inoculation isn’t expected to have kicked in yet.

However, 1,410 people tested positive two weeks after their first injection, by which time partial immunity should have already taken effect.

Moreover, 69 patients became infected with the novel coronavirus despite already having been administered both shots of the vaccine, the ministry said. Israel began administering the second doses almost two weeks ago, with Prime Minister Benjamin Netanyahu being the first to complete the course.

Pfizer has said that a spike in immunity occurs between Day 15 and Day 21 after the first jab, when the effectiveness of its vaccine increases from 52 to 89 percent. According to earlier trials, the protection offered by the vaccine reaches the 95 percent level a week after the second dose is administered, the pharma giant said.

When it comes to vaccines, the results of clinical trials may differ from how the immunization performs in the field, where it’s administered to a much greater number of people.

On Tuesday, Israel’s coronavirus tsar, Nachman Ash, reportedly complained to Israeli ministers about the insufficient protection provided by the first shot of the American vaccine. It turned out to be “less effective than we had thought” and “lower than Pfizer presented,” Ash said, as cited by Army Radio.

However, the head of the infection unit at Sheba Medical Center – where Netanyahu got his jabs – told Israeli media that the Pfizer vaccine “works wonderfully” after two shots. According to Professor Gili Regev-Yohai, 102 of the medics at the center were tested a week after completing the vaccination course, and all but two of them showed antibody levels between six to 20 times higher than seven days earlier.

Israel is leading the world in terms of pace of vaccination against the new coronavirus. Over the last months, some 2.15 million people received Pfizer/BioNTech jabs, with 300,000 already getting both shots.

Despite already vaccinating more than 20 percent of its own population, Israel doesn’t seem as eager to share immunization with Palestinians in the occupied territories. On Wednesday, the World Health Organization expressed its “concerns” over unequal access to vaccines between Israelis and Palestinian.

A WHO representative for Palestine said that the UN body has been in discussions with Israeli authorities on the possibility of allocating vaccines to the Gaza Strip and West Bank. Israeli Health Minister, Yuli Edelstein, has said her department may offer the Palestinian Authoritiy surplus doses after Israelis have received their jabs.