Home / WORLD / ‘This man is the undisputed GOAT now’: Djokovic fans elevate him among greats as Federer pays tribute after Wimbledon win

‘This man is the undisputed GOAT now’: Djokovic fans elevate him among greats as Federer pays tribute after Wimbledon win 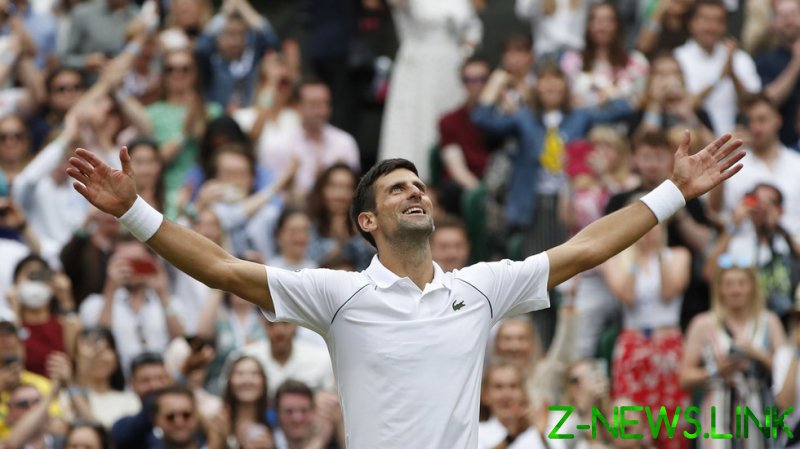 The Serbian ace achieved the feat by winning Wimbledon for the sixth time in his glittering caree, overcoming Italy’s Matteo Berrettini 6-7 (4-7) 6-4 6-4 6-3.

After clinching the Australian and French Opens earlier this season, the 34-year-old is now looking at completing a Calendar Grand Slam by coming out on top at Flushing Meadows in the US Open in September, and may even seek gold in Tokyo at the Olympic Games.

Showing respect to his generational rivals at SW19, Djokovic said: “I have to pay tribute to Rafa and Roger, they are legends of our sport and they are the two most important players that I ever faced in my career.”

“They are the reason that I am where I am today. They helped me to realize what I need to do in order to improve.”

Taking to Twitter, Swiss icon Federer congratulated him on his 20th major.

“I’m proud to have the opportunity to play in a special era of tennis champions. Wonderful performance, well done!,” he added.

Even more touching as this mutual respect though was how the Djokovic treated a young fan in the stands.

Spotting her in the crowd, Djokovic gave the “cutest girl in attendance” what is now an historical artefact in his tournament-winning racquet.

Back on social media, the debate raged as to Djokovic’s standing among the greats of the game.

“What an athlete,” one supporter beamed.

“He’s finally tied with his rivals. Sorry to all the “fans” who argued that he won’t be [the] greatest because he won’t have as many slams as the other two, but all they have now is bullsh*t. This man is the Undisputed GOAT now.”

“There are no more arguments against Novak Djokovic’s GOAT claim,” said another, more emphatically.

“The GOAT debate is over.”

“The Beast. The Monster. The Mean Machine. Novak Djokovic.”

As suggested, Djokovic can perhaps pip ahead of his two rivals with a win at the US Open, and end one of the best years of his professional life with a 21st major crown to his name to settle the debate for once and for all.

Or just for now at least.