Home / WORLD / ‘This is not the United States’: Spanish policeman filmed kneeling on TEENAGER’S neck for allegedly wearing facemask the wrong way

‘This is not the United States’: Spanish policeman filmed kneeling on TEENAGER’S neck for allegedly wearing facemask the wrong way 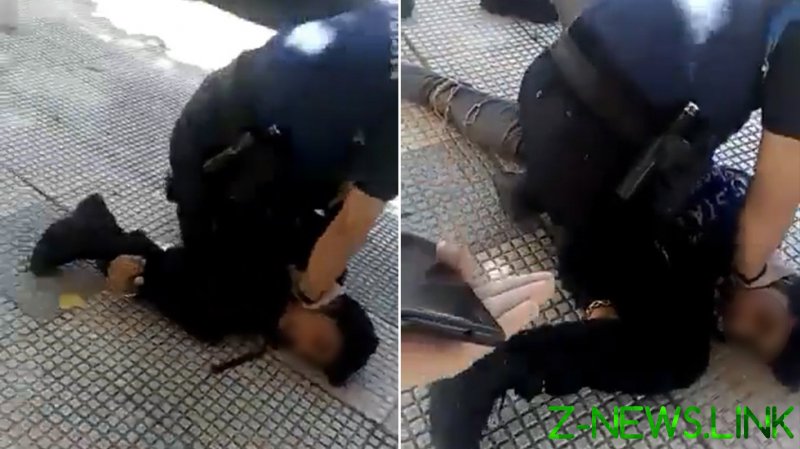 The incident was caught on camera by onlookers in the Northern town of Miranda de Ebro on Wednesday. In the footage, locals can be seen gathering around the policeman, protesting the treatment of the boy. One person is even seen trying to pull the officer away.

Authorities insist that the video was taken “out of context,” alleging that the teenager attacked the officer before the camera started rolling. “[The footage] is striking but the response was adequate and proportional to what happened,”said the city’s security councilman Pablo Gomez.

He further added that the boy attempted to assault the policeman with a chain, after being asked to straighten out his mask, so it properly covered his mouth and nose. “Before making a judgment people need to know the full version of events.”

The fourteen-year-old’s family have confirmed that the boy was wearing the mask around his neck when police approached him. The officer is reportedly on sick leave with a cheek injury sustained during the arrest.

As of right now, it is unclear what penalties await the boy.

Online commenters called the incident an instance of “excessive use of force” and “police brutality”. The social media user who uploaded the video to Twitter lamented the situation, writing, “this is not the United States,” referring to the death of George Floyd.

Floyd was an African-American man who died in Minneapolis police custody, after an officer pressed on his neck with a knee for almost nine minutes. The incident, which happened in May, sparked worldwide outrage and birthed a wave of citizen scrutiny over the police’s use of force.