Home / WORLD / ‘This is ABUSE’: Row rages after UFC star Ladd’s coach accused of ‘almost making her cry’ as she suffers defeat (VIDEO)

‘This is ABUSE’: Row rages after UFC star Ladd’s coach accused of ‘almost making her cry’ as she suffers defeat (VIDEO) 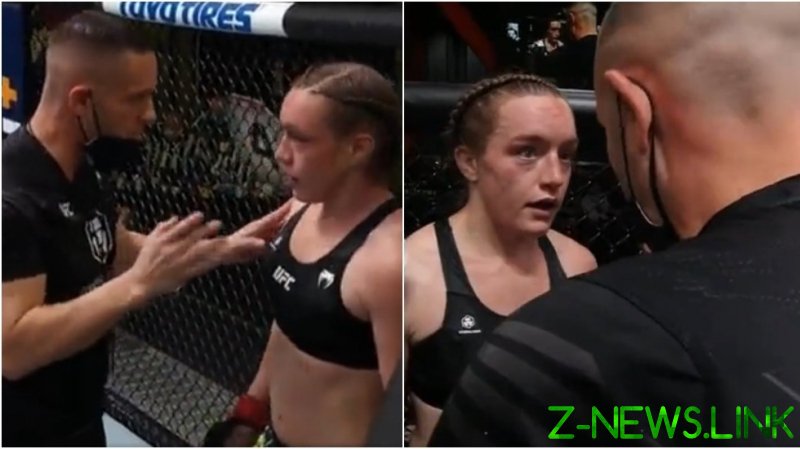 But moving to 145lbs – where many feel she is best suited – did not help Ladd as she offered little against Dumont, who was the more active of the pair and had notable success with her jab.

Ladd roused slightly in the final round, but Dumont held on comfortably for the win.

But online, debate was already raging about whether West’s tactics were right.

UFC women’s icon Miesha Tate, who was critical of Ladd for her weight-cut miss before her last scheduled fight, screamed that the coach’s actions were “abuse.”

“This is ABUSE, what a douche,” tweeted Tate.

When it was argued that West had deployed a similar method to motivate Ladd during her third-round TKO win against Yana Kunitskaya in her last bout, Tate shot back: “She would’ve done that without him it’s who she is.

“He will take credit for her win but never for her loss. Trust me she can only take so much of this abuse before it breaks her spirit.”

Others claimed West’s actions – which included apparently telling Ladd that she “had to finish this broad now” – were “awkward” to watch and that he was playing to the cameras rather than giving the tactical breakdown she needed to improve.

“He almost made her cry between rounds,” said another person.

However, some defended the coach, claiming he would know better than most how to get his fighter going.

“I mean he knows her better than us. He must know what motives her. And even if it doesn’t, he’s giving her a reality check. She’s on a fight and she’s losing, ain’t no time to beat around the bush. Better to be real rather than a Yes man,” wrote one fan.

“Only reason people think this is weird is because it’s [women’s MMA]. If this is a male fighter no one bats an eye at that,” read another response.

West, who is reported to be in a romantic relationship with Ladd, himself later issued an apology for the scenes.

“Tonight was not our night,” wrote the MMA Gold coach on Instagram.

“It’s been our night many, many times at the highest level but not tonight. I blame myself. Though it may not be my fault. It’s not up for debate. I take all the blame.

“Yes after the first couple rounds I may have been a little harsh but I know Aspen and at that time technical conversation was not in the cards being down 3 rounds.

“Nonetheless I own it and I am sorry @aspenladd from the bottom of my heart I will continue to be better each time.”

Ladd, 26, phlegmatic in an Instagram message she issued to fans, writing: “Not my night. Congrats to my opponent. We will be back better. In the meantime I finally got to get back in there after nearly 2 years.

“Now it’s time to take a step back, take a breath, and get back to fighting and feeling like myself again. On to the next.”