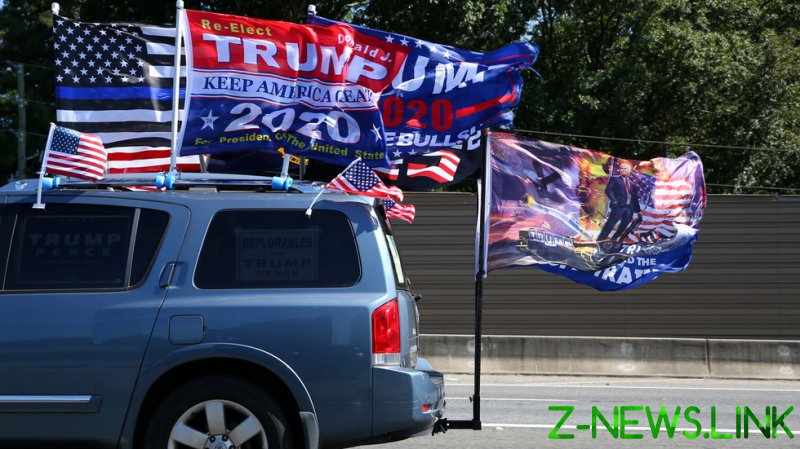 “Did you see the way our people – you know, they were protecting his bus yesterday because they’re nice,” Trump said Sunday at a campaign rally in Michigan.

Trump marveled that there were “hundreds” of vehicles in the convoy bearing American flags and Trump flags waving in the wind. He quipped that when he sees inherently small gatherings of Biden supporters, they “never” display a US flag. “I always say if you look at a group and you don’t see the American flag, you know that’s the opposition.”

The president’s comments came one day after he tweeted out a video of the convoy with the caption “I love Texas!” His apparent support for the stunt immediately stoked outrage among Democrats, with Biden campaign spokeswoman Symone Sanders scolding Trump for condoning behavior that was “reckless, dangerous and an intimidation tactic.”

The Biden-Harris bus was part of a Democrat driving tour that was meant to “drum up enthusiasm” at a series of stops in central Texas on Friday, said author Eric Cervini, one of the tour participants. Instead, the campaign events had to be canceled for safety reasons after the convoy allegedly harassed the group.

One of many videos posted of the pro-Trump group showed a black pickup pushing a white sport-utility vehicle, which was straddling two lanes of traffic, out from behind the Biden-Harris bus.

Democrats accused the convoy of trying to slow down the bus and force it off the road. Travis County Democratic Party Chairwoman Katie Naranjo said the Trump supporters, many of whom were armed, followed the Biden bus throughout central Texas and yelled curse words and threats.

Ex-pro poker player Anna Khait quipped that the convoy was a “Trump train escorting Kamala Harris out of Texas.” She added, “For those who are so triggered, it’s a peaceful escort with love – for this country.”

Long parades of Trump supporters have been common this year, involving both boats and cars.

Trump enthusiast Armand Klein tweeted out a video yesterday showing a line of pickups and other vehicles in Arizona that he claimed stretched 96 miles long.