Home / WORLD / The West pushes the Xinjiang issue hard and selectively, while ignoring the sustained slaughter of Palestinians 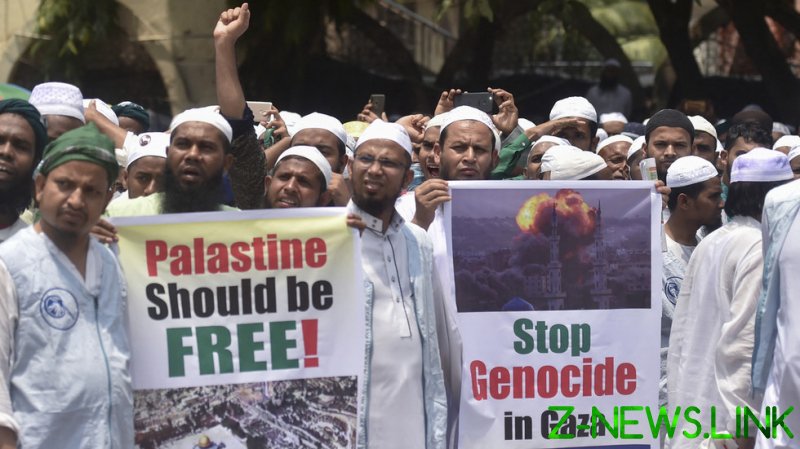 As Gaza burns and rages on, and Palestinians’ homes are turned into their graves, the West’s two-faced hypocrisy towards Muslims has never been clearer.

Unsurprisingly, despite the climbing death toll, condemnation from the West at Israel’s military action has been non-existent. The United States has blocked a UN Security Council Resolution over the matter, while its secretary of State, Antony Blinken, unironically tweeted a celebration of the Muslim Eid Festival.

In the absence of such condemnation, there was at the same time nonetheless a concerted and observable push by the mainstream media and US-affiliated organizations yesterday to put the Xinjiang autonomous region of China back on the agenda.

Several stories were tactically released, including a report from the National Endowment for Democracy-funded Uighur Human Rights Project accusing China of imprisoning Imams on trumped-up charges, while another from the US State and arms industry-funded Australian Strategic Policy institute accused them of demolishing mosques. At the same time, the US and its allies lobbed accusations at China in the United Nations and Blinken branded Xinjiang an “open-air prison”.

The West is pushing the Xinjiang issue hard and selectively, while ignoring long-term sustained atrocities regarding Palestine. They then wonder why Muslim countries largely offer support to Beijing on this matter and don’t take the West’s word for it. The answer is because, unwittingly, the Israel-Palestine conflict (like all the other Western-backed conflicts surrounding it), remains the primary wedge of geopolitical distrust between the Islamic world and the US and its allies.

These countries have no reason to take America’s human rights rhetoric seriously due to the devastation it has inflicted on the Middle East, and they subsequently share a common interest with China on the norm of defending “national sovereignty” from outside interference.

The West advocates to its own public an image of benevolence and sincere self-righteousness, masquerading and rebranding what was otherwise a longstanding history of imperialism, as a global force for good and justice. As what is deemed “morally correct” overlaps with what constitutes “political truth” in Western theory, few of its citizens question the utilization of human rights as an extension of politics or the idea such a premise could possibly be motivated by dishonesty, economic power or malign intent; to be honest about it is rendered a form of “blasphemy”. Thus, what is deemed “universal human rights” are not truly universal at all.

Countries in the Global South, especially in the Middle East, recognize this. In their experience, human rights have been persistently used as a pretext by Western countries to advance strategic and military goals in order to dominate them, as opposed to a truthful effort to improve people’s liberties and quality of life. And which are subsequently ignored when it suits the West, especially in matters of a much greater grievance to the Islamic world such as the Israel-Palestine conflict, which has been the keystone of anti-Western sentiment and ideology in the Middle East since the first Arab-Israeli war of 1948.

There have been many Western interventions in the region, mostly in a period between 1991-2012, justified on the grounds of human rights, such as Iraq, Libya and Syria. Concerning the latter, the West has accused Bashar Al-Assad of killing civilians in the decade-long civil war and called for his removal. Yet at the same time, the West has continually endorsed long-standing killings of civilians by Israel against Palestinians, and enabled that country’s expansionist policies in occupied territories, its unbridled aggression against many of its neighbours, and failed to resolve the seven-decade-long conflict.

In this case, if you are a Muslim country, why would you believe the US and its allies when they suddenly start crying atrocity, genocide and claiming they are standing up for the rights of a Muslim minority group in Xinjiang? Does this, for any Muslim country, have any real credibility?

The same countries who destroy Middle Eastern countries with war and bombings, and refuse to condemn Israel even modestly, now frame themselves as the guardians of Muslims? It’s no surprise that Muslim countries have not joined in the West’s chorus of condemnation, but have offered support to China’s policies. Even if they do not agree ideologically with China as an atheist, communist state, there’s one important point regarding Xinjiang that creates a space of common interest: defence of national sovereignty.

Irrespective of what they may think about events on the ground in Xinjiang, Muslim countries are largely post-colonial states which have suffered, and continue to suffer, from Western interference. Therefore, China’s norm of “non-interference in one’s internal affairs”, combined with its emphasis on defending sovereignty against Western intervention, is an attractive and logical solution to Muslim countries. Why would any such nation jump on the Xinjiang bandwagon and promote the idea that the West should be allowed to assault a country on the pretext of human rights? What might this mean for them?

Muslim countries support China on Xinjiang for a myriad of factors, have no good reason to trust the West, and recognize that the US, the UK and other such countries crying foul on this issue are doing so out of political motivations, as opposed to a sincere concern about the well-being of Islamic people.

As Gaza’s buildings are razed and its people slaughtered, the silence and indifference on this issue speaks louder than words concerning the West’s position on “human rights”. Let us end with this comparison: Palestine is an issue which Muslim countries are angry about, which is ignored by the Western elite; Xinjiang is an issue which the US-led alliance is angry about, that they desperately want Muslims to be furious about on the West’s behalf, but is rightly being ignored.