Home / Video news / The translators of the Russian Federation have distorted the speech Steinmeier about the Crimea. Video

The translators of the Russian Federation have distorted the speech Steinmeier about the Crimea. Video 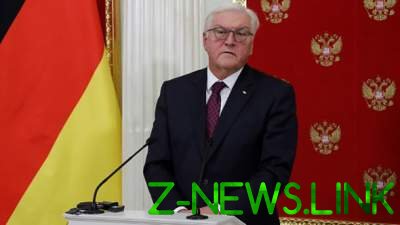 The translator who translates into English, paused and gave about “reunification of Crimea with Russia.”

Russian propagandists went silent, the President of Germany Frank-Walter Steinmeier during his visit to Moscow celebrated the annexation of Crimea, but he attributed the words of “reunification” of the Peninsula with Russia.

This was announced by the Ambassador of Ukraine in Austria Alexander szczerba on his page in Facebook.

“About 8 minute 15 second You can see how the work of a totalitarian fake news. Steinmeier said in German: “Annexion”. The translator goes astray and translates: “Reunification with Russia”. Miserable frightened liars,” — said the diplomat.

See also:  In the Russian defense Ministry told about the situation in Syria

In addition, he published a relevant video that came on the resource Ruptly, which is part of the Russian state media Russia Today.

According to the staff, even those who do not speak the German language can make sure that Steinmeier spoke about the annexation.

Note that the translator who translates into English, paused and gave about “reunification of Crimea with Russia.”

See also:  The battle under the Sand: the military repulsed the attack of DRG of the opponent. Video

By the way, in English there is the term annexation, which is usually used by the Western officials when they talk about the Russian annexation of Crimea.