How to transfer large amount of data from one device to another? The most popular answer to this question is to use an external hard drive, but these devices, as is known, can not be called fast or reliable. Inside every HDD many mechanical parts, if the transport to drop this drive, the security of the data no guarantee can not. 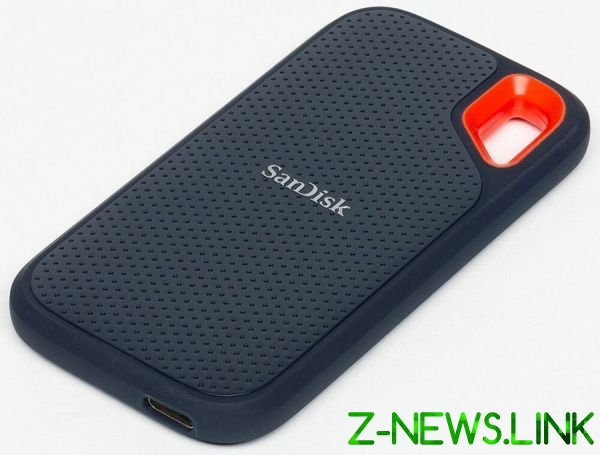 A great alternative is a portable SSD, the new generation of mobile storage media capacity and SanDisk just has one. The model is called the Extreme and is offered in several versions, differing in capacity. Devices of this kind have many advantages and benefits against the background of classical hard drive and this is the case when new is actually better than the old.

In our test, the SanDisk Extreme version for 500 gigabytes. Consider what he’s capable of, and what he did is good, but let’s start not with a review, and with the target audience.

The SanDisk Extreme was created for those who regularly carry large amounts of information – tens and even hundreds of gigabytes, and to constantly update them. For example, it can be photographers, videographers, and employees of it departments of large companies, who know that many colleagues it is easier to bring the data on the physical media than to spend time training to work with the local network.

The SanDisk Extreme is a complete alternative to conventional USB drives, the only difference is, it does not have built-in USB connector. But this is offset by significantly large volume with very compact dimensions, so if you are tired of suffer with a pile of flash drives, you know what you can replace them. Moreover, it claimed a particularly strong case, which will be discussed separately. 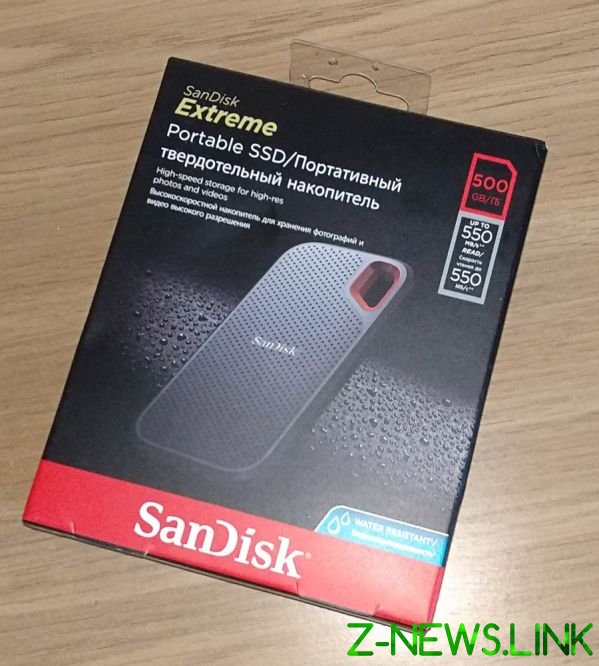 SanDisk Extreme sold in voluminous colorful box made of durable cardboard, and packaging much more than the drive itself. Everything is decorated very nicely – the manufacturer immediately indicates to all device features, including increased strength and the fact that you can store large amounts of media content. Design SSD too, you can see immediately, as well as its specification – the speed is indicated on the front and detailed specifications are in the back. All information is available in Russian language. 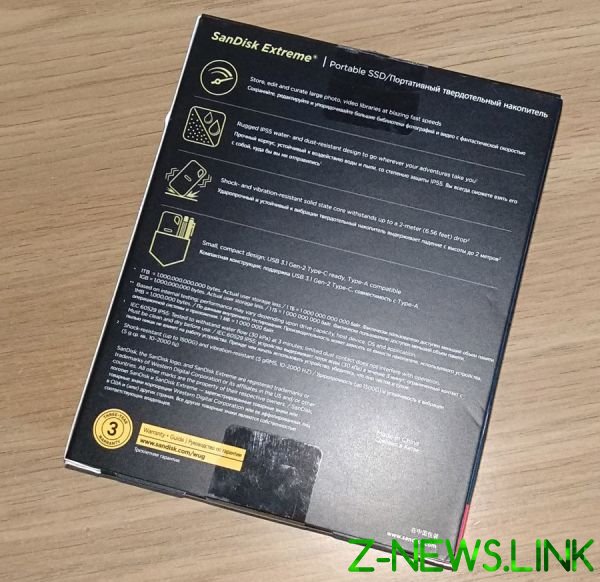 In picking the SanDisk Extreme there is nothing superfluous – only the drive itself and the cable with connectors USB-C on both ends. It is done deliberately in 2019 it’s time already to get away from old standards, especially as USB-C shows excellent data transfer speed. If your PC is free of this connector, it is useful to complete removable adaptor to USB 3.1. It is also compatible with USB 3.0, USB 2.0 and USB 1.1 – we checked it out. 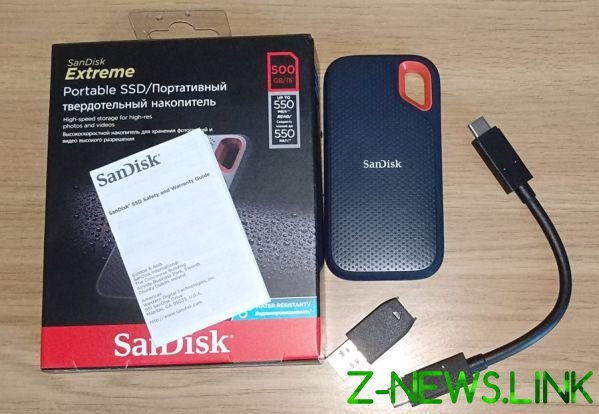 The safety of the shell 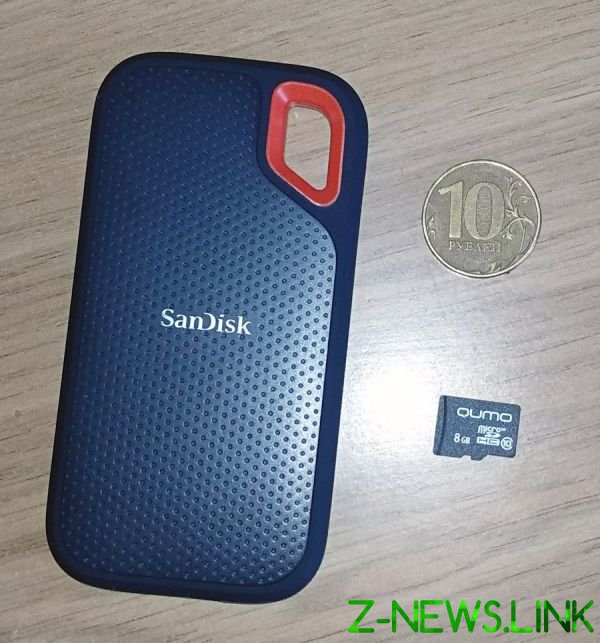 The manufacturer claims that the SanDisk Extreme is able to withstand falls from heights up to two meters, and can survive getting wet in the rain (IP55 standard). However, he must not only maintain integrity, but also to remain fully operational.

As it turned out, the SanDisk Extreme can survive a fall from a meter height (for example, out of pocket). Two meters it is also not care – after such abuse on the body did not appear any scratches, and the SSD was determined by the computer without problems.

To reset a SanDisk Extreme with a greater height is more complicated – you have to discover it. Above three metres to rise did not become, but such a mission he survived by leaving in his memory a few chips on the body, nothing serious.

To verify protection against water, we did not and you do not recommend. Yes, the USB connector are a tad recessed in the housing, but moisture can still get into it, because no stubs are not available. Therefore, despite the high reliability of SSDS compared to hard drives, they still, like any technology, afraid to get wet. 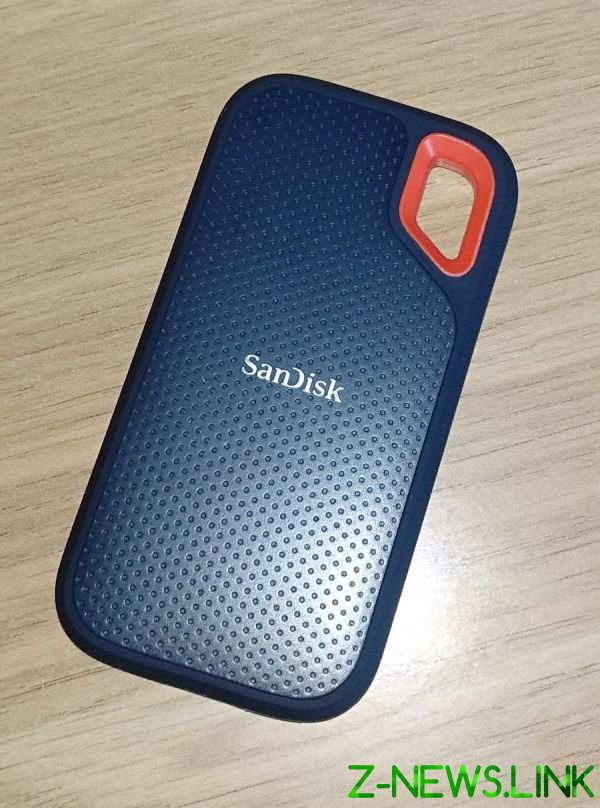 Go to appearance. For its size the SanDisk Extreme flash drives more, but less than HDD size it can be compared with a plastic Bank card except that it is slightly thicker. The casing is completely plastic, painted in a beautiful shade of blue. Almost all its area is covered with a special rubber material, and the top has an insert constructed of plastic with a typical “mesh” pattern. Also, we should note the large size of the eyelet is trimmed in bright orange plastic that is required to be worn on a carabiner or keychain with the keys. 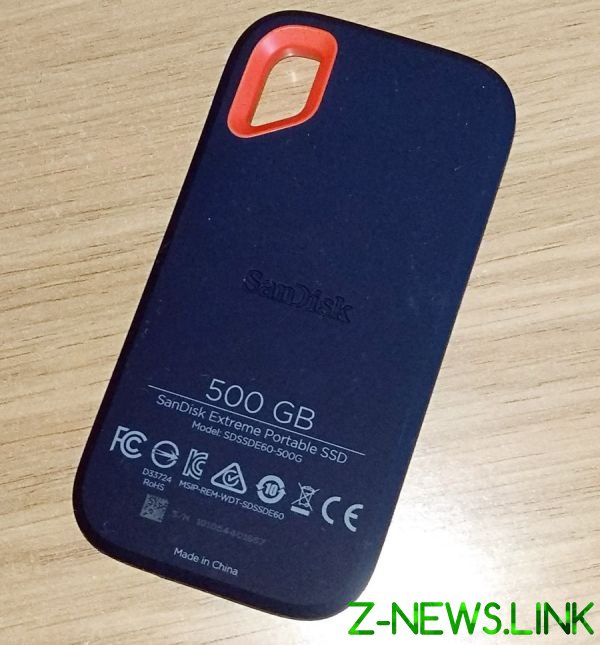 The power button at the SanDisk Extreme as 99% of the external media, there is – it is activated immediately after connecting to the computer. the USB-C port is placed into the lower end of the body and does not spoil the appearance of the device. The led indicator of the drive we found was not, but he is not especially required – it’s just an extra design element and not the most popular. 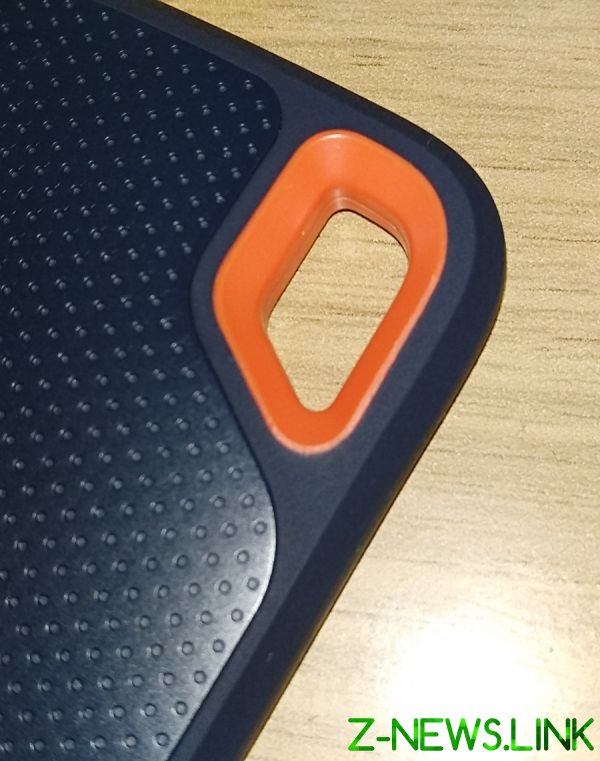 The main advantage of the SanDisk Extreme is many times referred to its compactness. After the usual 2.5-inch hard drive barely fits in the palm of your hand, this SSD seems to be just a tiny – can you compare how much less it is one of the most compact external HDD available on the Russian market.

The eye is large enough for most clasps and rings, but with the constant friction of them can be covered with scratches. The rubber coating on the ends and on the rear panel allows the SanDisk Extreme does not slip out of hands and won’t slide on the table. To the touch this material is very nice, but it has two disadvantages – it collects dust and fingerprints and is difficult to clean, you will need wet wipes. 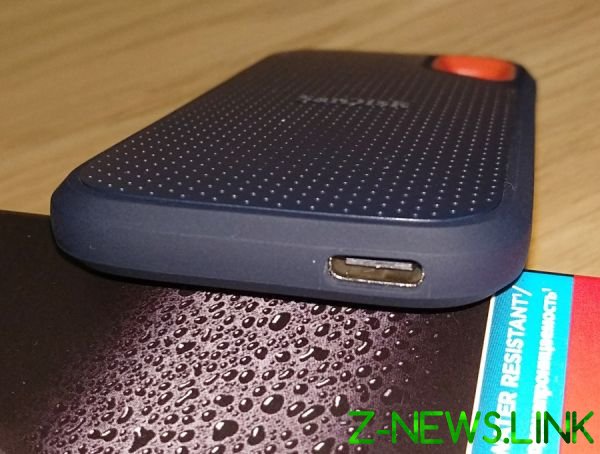 Slightly recessed into the housing of the USB-C connector holds the included cable is very durable – thereís no backlash. To the cable have issues: it is clear that he made very high quality, and slim it can not be called, but its length leaves much to be desired. 15 inches, taking into account connectors is quite small, and to be convenient only with laptops or system blocks that have ports on the top or front panel. On the other hand, if you have a USB-C cable from the smartphone, it is also nice – we have tested this on a shoestring Xiaomi Mi 2 Max. however, this may directly affect the speed, so if you need a longer cable, don’t skimp on it. 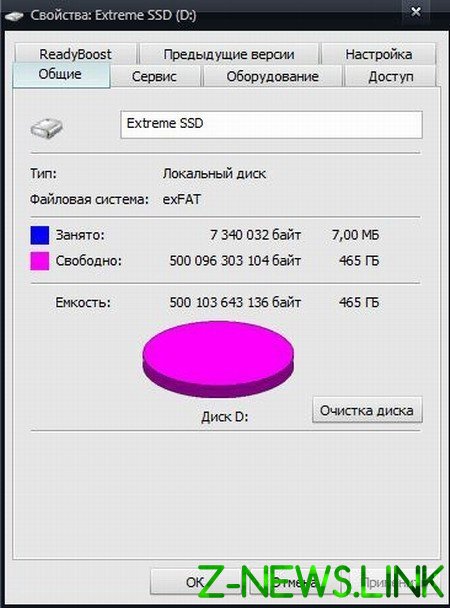 According to our test results, the SanDisk Extreme works equally well under Windows XP, Vista, 7, and 10, the connection speed the OS version is not affected. Test it on macOS is not possible due to the lack of “Apple” technique in the editorial, but the manufacturer will work with her said. 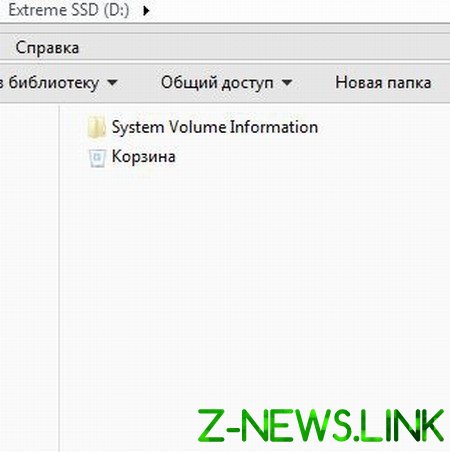 Test sample storage was determined on all systems when connected to the USB ports 2.0, 3.0, and 3.1, driver installation not required even under Windows XP. After auto-formatting in exFAT system on a disk of 500 GB left of 465 GB. No additional application in the device memory was not. 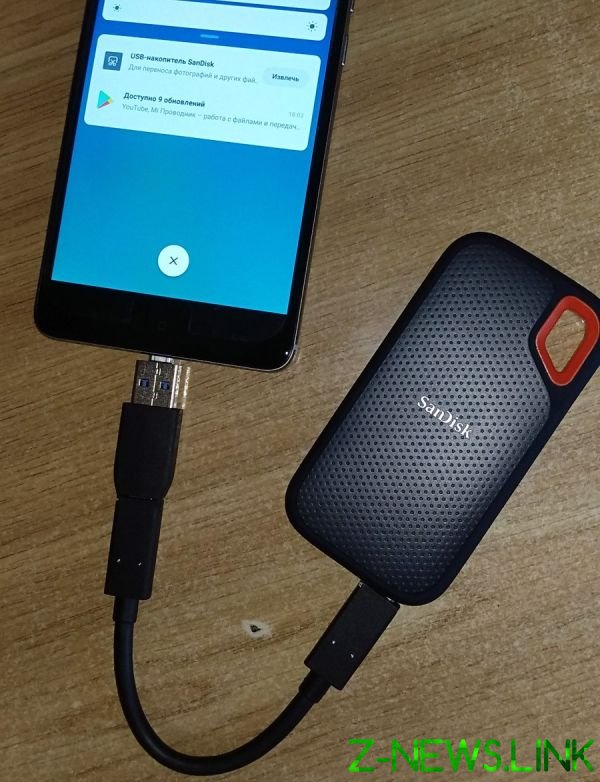 The SanDisk Extreme can be paired with smartphones and tablets based on Android OS, and even if they had no USB port-C. In our case the drive decided to Mi Max 2 when connected via cable supplied – the standard file Manager immediately recognized him.

No less works well focus connecting to smartphones with microUSB 2.0, though this will require additional props. You need the included cable and adapter, adapter USB-A to microUSB 2.0, but everything will work 100% guarantee. The photo shows that when using two adapters, SanDisk Extreme decided on a modern smartphone Xiaomi Redmi Note 4.

It should be noted that compatibility with gadgets the manufacturer stated. Besides, the maximum speed in this mode should not count – will be restricted to the controller of the mobile phone. 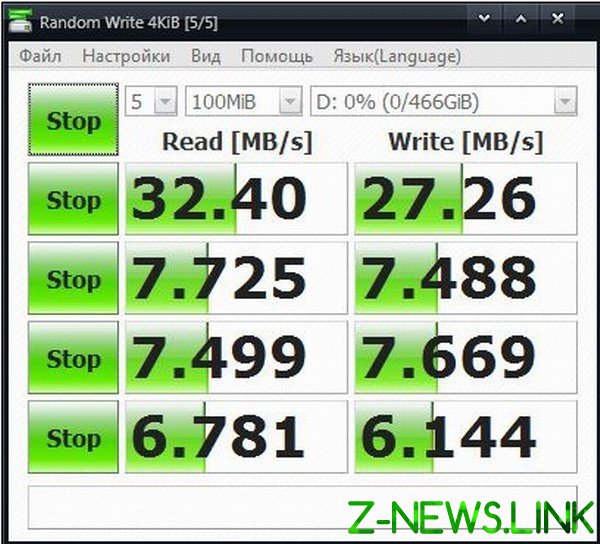 The test drive was carried out on under any OS listed in the program CrystalDiskMark the most current at the time of writing version. When connected to a USB 2.0 you will never be able to appreciate all the features of the SanDisk Extreme, but the SSD is pumping interface to the full, squeezing from it everything that is possible. 32,4 MB per second when reading and 27.2 MB per second when writing faster on USB 2.0 for sure, few will be able from external media. 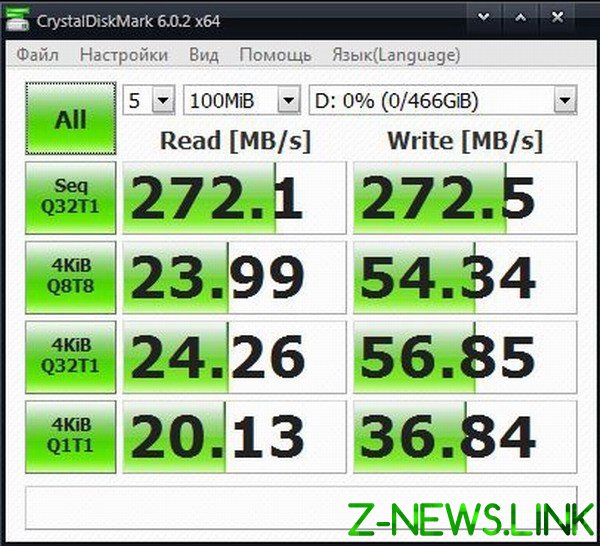 With USB 3.0 everything is much, MUCH more interesting – for 272 MB per second when reading and writing respectively. But most important is how SSD behaves when connected to a SuperSpeed USB 3.1. In our case, he showed his best side: the manufacturer declares up to 550mb per second in both directions, and our tests showed 524 and 489 MB / s read and write respectively. In other words, if you have to throw the drive a couple of dozen movies 1.46 GB each, then write one such file will go in three seconds, and to read – and even less. During testing, the heating of the SSD was not observed. 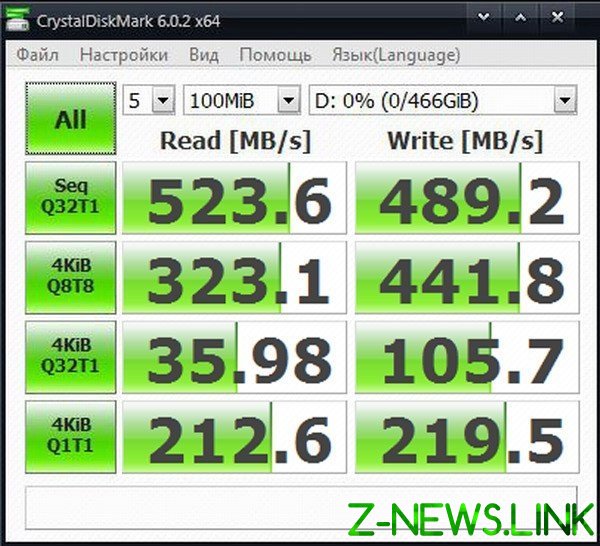 – the lack of heating during operation;