Home / Video news / The Russian boxer knocked out Ukrainians in the second round. Video

The Russian boxer knocked out Ukrainians in the second round. Video 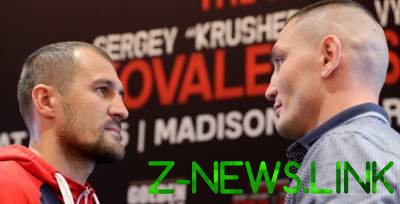 The title of world champion under version WBO went to Russia.

Ukrainian boxer Vyacheslav Shabran (19-2, 16 KOs) failed to win the title of world champion under version WBO in the light heavyweight division, which took place in the night from Saturday to Sunday in the United States.

Kovalev was the bookies and proved it in the first round, when they twice sent Shabran down. The end came in the next round. At the end of the second three-minute Kovalev has once again sent Shabran down, he managed to rise to his feet, but to withstand the assault of the Russians, he could not – and the referee stopped the fight.