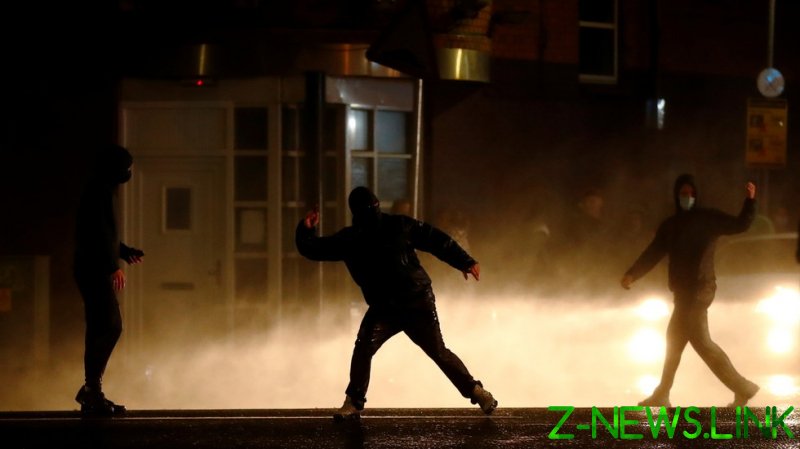 EU officials have obstinately adhered to an onerous Brexit-deal provision that has alienated pro-UK Ulster unionists in Northern Ireland from the British mainland, making some of them launch what they believe is a proportional response to an undemocratic decree.

European Commission spokesman Eric Mamer issued a statement on Thursday condemning the uprisings, claiming that “no one has anything to gain” by escalating them, when, in fact, the EU has been using Northern Ireland’s post-Brexit arrangement as a political prop for selfish gain.

The Brussels-crafted Northern Ireland Protocol, part of the final UK-EU deal on Brexit, keeps Northern Ireland entirely within the EU’s Single Market for goods. In effect, the EU’s customs code, as well as other parts of the EU regulatory regime on electricity, VAT and state aid, have to be obeyed by the region. Border checks are required for goods entering and leaving Northern Ireland to and from the rest of the UK.

Northern Ireland’s Stormont assembly has to provide its “consent” for the terms to continue in force, but it can only vote to remove the arrangement four years after implementation (which began in January 2021), and then would have to wait an additional two years if a vote to remove the protocol were carried.

The clause now exercises de facto control over Northern Ireland’s regulatory regime, even though only part of it has gone into effect. What has appeared is a virtual trade border in the Irish Sea, causing UK-mainland trade with the region to decline precipitously.

Yet EU leaders keep pressing this factious, trade-disrupting agreement as if it were the key to preserving peace among nationalist republicans and Ulster unionists, and not the problem that has unraveled peace. Officials in Brussels have been busy mouthing platitudes about how the protocol supposedly serves as a master key securing not only the gains of the 1998 Good Friday Agreement – which enshrined power-sharing among republican and unionist representatives in Northern Ireland’s administration – but also the EU Single Market.

European Commission Vice President for Interinstitutional Relations and Foresight Maros Sefcovic insisted on March 15 that: “The protocol on Ireland and Northern Ireland is the only way to protect the Good Friday (Belfast) Agreement and to preserve peace and stability, while avoiding a hard border on the island of Ireland and maintaining the integrity of the EU Single Market.”

Contrary to his rhetoric, the protocol is hardly an equitable arrangement, with its balance shifted more towards packing in as much regulatory oppression as possible and then delaying considerably Stormont’s ability to vote it down. All unionist parties in that assembly reject the protocol, and it has undermined the same Good Friday Agreement the EU claims it protects.

In a statement released shortly after fresh violence erupted on Wednesday night in west Belfast between loyalist-unionist and Irish-nationalist factions, with gasoline bombs lobbed, eight police officers injured, and a bus hijacked and burned, the Ulster Political Research Group, linked to the loyalist paramilitary Ulster Defense Association (UDA), stated that “politics alone” could solve the situation of unrest. Specifically, the group pointed to the unrest being catalyzed by the imposition of a hard border in the Irish Sea.

That was the same causative reason cited earlier, on March 3, when the Loyalist Communities Council (LCC), the representative organisation for loyalist paramilitary groups including the UDA, withdrew its support for the Good Friday Agreement in a letter to Boris Johnson.

LCC Chairman David Campbell detailed that his organisation had pulled out because of “the disruption to trade and commerce between Northern Ireland and the rest of the United Kingdom that is occurring”, with the protocol putting the region and the rest of the UK under two different customs regimes. He stressed that, though the protocol contains wording claiming to secure the Good Friday Agreement’s peace and protection afforded to both unionists and republicans, in implementation, it “repeatedly breaches those objectives”, upholding the republican plank of having no hard border on Ireland while destroying the unionist demand of having no hard border, “either physical or regulatory,”between Northern Ireland and the UK mainland.

According to Campbell, his organisation cannot return to the peace agreement until “the protocol is amended to ensure unfettered access for goods, services and citizens throughout the United Kingdom.”

Just as recent events roundly disprove the EU’s claim of the Protocol upholding the Good Friday Agreement, stark economic facts show that neither does it fundamentally underpin the Single Market.

By any reasonable examination, trade taking place across the political boundary between the Irish Republic and Northern Ireland is relatively miniscule when thrown into the balance of the other far larger trade volumes in play. In 2019, Ireland’s total merchandise exports were over €152 billion, yet roughly only€2 billion of that went to Northern Ireland, making Ulster account for only about 1.4% of Irish goods exports.

Yet total intra-EU trade in goods among EU member states in 2020 – the entire trade value of the Single Market – was valued at over €2.8 trillion. Intra-Irish trade, then, is not some all-powerful pivot on which the EU’s Single Market depends. EU leaders nonetheless make their ludicrous claims, because, with the protocol, they want to claw the rest of Britain back into the EU regulatory straitjacket, whatever the damage this causes to peace in Northern Ireland.

Sefcovic’s March 15 comments came as Brussels had just launched a lawsuit against Boris Johnson’s measures to delay implementation of the protocol by keeping food, parcels, animals and horticultural products moving freely without full border checks. These easements – which are legitimate ways to keep Northern Ireland’s feeling of union intact as a longer-term solution is worked out – were derided by the EU and may be settled in the European Court of Justice, even though the UK is out of the EU.

For Northern Ireland First Minister Arlene Foster, the antagonism has shown that “Brussels is foolishly and selfishly focused on protecting its own bloc.” Foster heads the Democratic Unionist Party (DUP) – the region’s largest party, allied with the Conservatives in Westminster – and wants the protocol suspended. Her party harbours deep-seated fears it is a big step along a path to a united Ireland.

Yet, days later, with the unionist battle line firmly drawn and the EU’s piety of promoting peace with the protocol thoroughly exploded, Brussels retrenched and continued its presumptuous manoeuvering. At the March 26 meeting of the joint EU-UK specialist committee on the Northern Ireland protocol, EU officials ramped up their salami tactics of riding the Ulster unrest to rope the entire UK back into EU regulatory codes.

The Brussels representatives again claimed the protocol was “the only way to protect the Good Friday (Belfast) Agreement … while maintaining the integrity of the EU Single Market”, and called on the entire UK “to have a comprehensive veterinary agreement following the EU’s [sanitary and phytosanitary, or SPS] rules.”

If the UK were to take this bait of permanent regulatory alignment on SPS rules, which govern the large trade volumes in EU agricultural products (including food), it would restore the EU’s competitive advantage in this area, thereby neutering Brexit Britain’s potential to strike more-beneficial trade deals with third countries.

But the EU diplomats, of course, presented this curtailment of the UK’s regulatory autonomy as a net benefit, which would lead to “a significant reduction in the number of certificates and controls needed” in the rest of the UK’s trade with Northern Ireland and the EU. What they omitted to mention was that Brexit’s trade advantages would be erased in that situation: the UK could not set its own rules to allow cheaper agricultural products from third countries entry into its market, nor could it have any real latitude in devising domestic agricultural-trade regulations in its own interest.

Though the UK is already temporarily aligned with certain EU SPS rules as part of a provision in the protocol, the EU seeks to make that regulatory burden permanent and comprehensive, hence why it is trying to posit peace in Northern Ireland as contingent on the UK’s regulatory surrender.

Of course, it is also legitimate to question why Boris Johnson signed up to this protocol in the first place, given its likelihood to cause the conflagration it has. And some, including many gleeful remoaners, have done just that. But now that both sides see clearly the protocol problem for what it is, and for what it causes, it is only Johnson’s Britain that is seeking to alter and improve it, while the EU sticks iron-rigid to its position, even as Belfast burns.

Ironically, at one time, the EU could have claimed to have been a constructive player in the Northern Ireland peace process: the more than €1 billion in cohesion funds it disbursed to the province, starting in 1995, may have smoothed the way for what became the Good Friday Agreement.

But its lingering, petty distaste over Brexit and its desire to see a disobedient Britain punished have directly damaged that agreement, through a protocol that endangers peace and threatens the UK’s prosperity. This EU intransigence has spurred the recent sectarian violence, and, in a further irony, has validated one of the main justifications for Brexit: the EU’s condescending disregard for British interests.