Home / WORLD / The parallels between the broken, failed & divided state of 1990s Russia and today’s America are fascinating

The parallels between the broken, failed & divided state of 1990s Russia and today’s America are fascinating 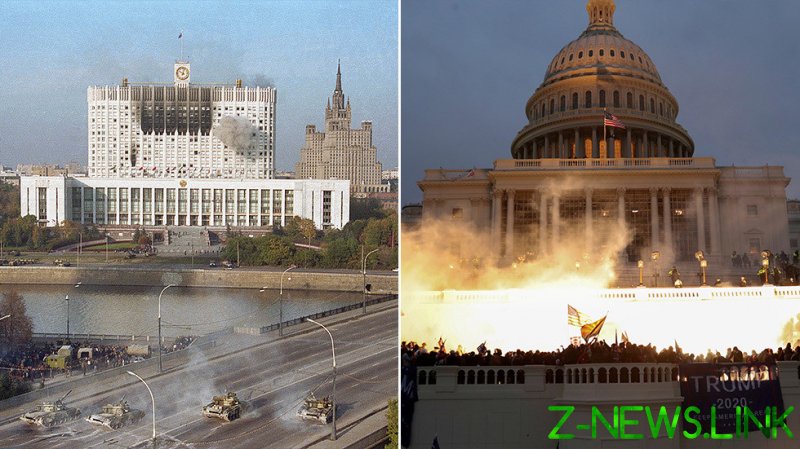 In the aftermath of the catastrophe on Capitol Hill, an opinion piece in the New York Times took the seemingly curious step of comparing the situation in the United States to post-Soviet Russia. The author noted that the parallels between those who had attempted to ransack Congress and those who had spurred uprisings in both Moscow and Ukraine, in both cause and appearance, were remarkable. In particular, how both groups longed for times gone by, be it a nostalgia for the Soviet Union or the Confederate States of America. Although of course these movements were ultimately all unsuccessful, the piece was then finalized by remarks dwelling on the decay of democracy.

And that is of course the big debate in the aftermath of this event, a potentially existential challenge to the legitimacy of the American political system that the Trump administration has posed. Yet, the comparison to post-Soviet Russia is a strange one, perhaps because although it was fully democratic in name, in the 1990s, the country was ultimately a broken and deteriorating one beset by challenges and disillusionment that never quite lived up to its ideals, and was rife with unrest. It stands as an example as to how the ideals of democracy can only truly be utilized in practice if the people themselves believe in it and have a stake in it, which seemingly many Americans now do not. Such failed uprisings do not have to prevail in order to show the problems which lie ahead for America.

Liberal democratic thought is premised on idealism and optimism, based on an enlightenment rationalism which believes its principles are the natural true desire of all human beings and that when implemented, will always flourish. When the US and its allies toppled regimes in Iraq and Libya, they believed by simply creating a democratic constitution that these countries would flourish and become a mirror image of the Western nations. But that didn’t happen. In a matter of years, these democratic ideals did nothing to prevent these countries reverting back into conflict, chaos, and insurgency, creating a worse situation than the US sought to intervene against.

The liberal democratic thesis has a blind spot. It simply assumes that ‘bad people’ seek to destroy democracies in a simplified game of ‘good vs. evil’, and ignores the fact that a democracy is only as functional as the socio-economic system which supports it and those who have a stake in maintaining it. Democracy is not something merely written on paper; it is not a moralistic and magical formula which always works as advertised; it needs to be supported and incentivized. If it cannot change people’s lives or deliver anything meaningful, then why should people have faith in it? And this was precisely the story of Russia in the early 1990s, which was not so much a miraculous demise of communism and openness as the West portrays it to be, but a time of depravity, decay, and setback in the eyes of locals.

The United States portrayed the demise of the Soviet Union and the birth of Russian democracy as a miraculous step forwards merely because its ideology changed. Everything was better after that, right? Yet the facts tell a different story. The rapid transition to an ultra-capitalist system destroyed the national economy and plunged it into a huge depression, with a clique of oligarchs gobbling up everything and living standards and health outcomes deteriorating.

Yet the Western narrative will teach you that none of this mattered because Russia was now a democracy and open to the world. Those romanticized photos of huge queues outside McDonald’s in Moscow painted over these grim realities, and the fact Russians had absolutely no confidence in the administration of Boris Yeltsin.

It is no surprise on that note, that early modern Russia was plagued by unrest and by a nostalgia of looking back on better days. And herein lies the comparison to the United States. While the economic situation is not as dire as 1990s Russia, it nevertheless represents the other side of the same coin in being a deeply unequal country which is dominated by the ultra-rich, with a huge constituency of individuals who feel that they have been left behind by the system and have no stake in it. Why else did Trump get to where he is? Because he sold a nostalgic vision of an America that, in people’s minds, worked. ‘Make America Great Again’ found reception in identities which were insecure and had lost faith in American democracy.

And it is no surprise on that note, that American politics has under Trump’s tenure continued to divide and polarize at an alarming rate, to the point where many are willing to challenge the legitimacy of US democracy itself in the name of respective identity politics. In other words, as America pulls away from itself in these bitter battles, the premise of a stable and balanced democracy is challenged just as it has been in numerous other countries, because democracy in practice does not function as an idealism.

The numbers do not lie: 45 percent of Republicans supported the attack on the Capitol and only 27 percent believed it was a threat to democracy, whilst 56 percent of all voters believed that fraud took place to change the outcome of November’s election. Trump’s narratives are not as fringe as they are made out to be, and the fact that the US system itself is not exempt from widespread disillusionment and impediments to the functioning of democracy, illustrates that it is not as exceptional nor magical in its ideological vision as it has presented itself to be. Unless there are drastic adjustments in American society that can heal these growing wounds, it is certainly not bizarre to refer to the future of the US in the guise of Russia’s past.