‘The most painful of recoveries’: Liberals gloat as conservative YouTuber Steven Crowder hospitalized with ‘collapsed lung’ 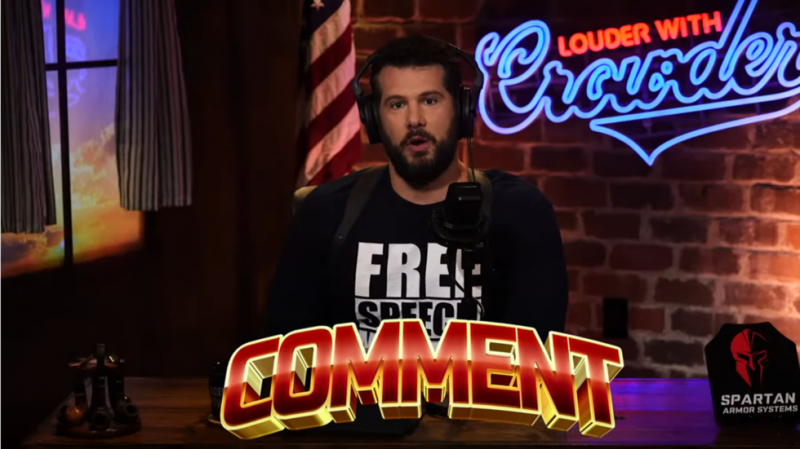 The ‘Louder with Crowder’ host received the opposite of an outpouring of support from the liberal-minded on Twitter after he announced on Tuesday that he almost died after his lung collapsed earlier this month.

“Last night took a turn for the worse. Ever actually get so close that you can physically feel death? He’s a d**k,” Crowder tweeted, adding that his condition is “fixable” and that he hopes to get better soon.

Crowder, who recently had surgery for what he called “a stupid genetic defect” causing his chest to ‘cave in’ on his heart, said last week that he had “a mild lung collapse” and noted that this setback would make his road to recovery longer than expected.

Responding to the comedian’s close call with death, many of his detractors could not contain their joy, some suggesting it was retribution for him recreating the death of George Floyd under the knee of ex-police officer Derek Chauvin for his channel. The clip saw Crowder ‘star’ as Floyd, and has sparked massive backlash online.

Former Massachusetts Democratic primary candidate and games developer Brianna Wu tweeted that although she is usually for casting political differences aside and “for showing compassion,” she “can’t help but remember” Crowder’s Floyd scene.

Among those who jumped on the Crowder-bashing train was Kendall Brown, an Oklahoma-based digital strategist and self-professed “health care advocate” who is “fighting to defeat Republican supermajorities.” Brown has amassed over 22,000 followers on Twitter and wrote an opinion piece for CNN last year, in which she attacked ex-President Donald Trump’s handling of the Covid-19 pandemic and its impact on chronically ill Americans.

“In case the President and his allies have forgotten, let me remind you: elderly and chronically ill Americans are still, well, Americans. Our lives matter every bit as much as those of our healthy neighbors,” Brown wrote in the op-ed.

This time, however, Brown struck a less compassionate tone, tweeting that while she “normally” wouldn’t laugh at sick people, Crowder was an exception because of his YouTube antics. “I wish him nothing but the most painful of recoveries,” Brown added in a since-deleted tweet.

Film producer Tariq Nasheed, who is no less controversial himself when it comes to race issues, called Crowder “a white supremacist, who decided to make a living spewing anti-Black racism,” completing his vitriolic tweet with a symbol of a voodoo spirit, known as a god of war.