Home / WORLD / The Met Police are institutionally misogynistic and incapable of protecting women, as I found out when they arrested me

The Met Police are institutionally misogynistic and incapable of protecting women, as I found out when they arrested me 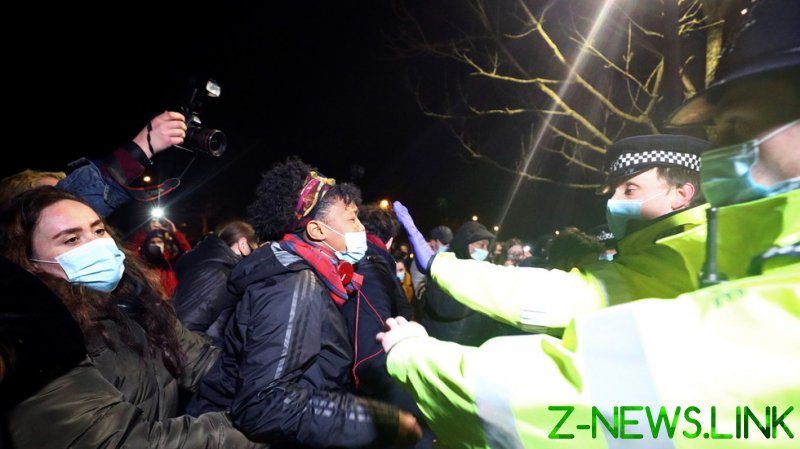 The Metropolitan Police are flapping around like drowning men in quicksand following the awful death of Sarah Everard and the news that a serving officer is in custody facing charges of kidnap and murder.

The case has sparked a national debate over women’s safety, which has involved an aggressively policed vigil on Clapham Common at the weekend, and the announcement of new measures including better street lighting, more CCTV and undercover officers in pubs and clubs.

Of course, it is right that the issue is being discussed. But what also needs addressing is that in the week since Sarah’s disappearance was first made public, the Metropolitan Police have behaved with incredible callousness, insensitivity and stupidity that can only come from a sense of entitlement that they are in fact above the law they are meant to serve.

This has been a shocking reminder to politicians and the mainstream media that when civil liberties and human rights are under threat, the state sees its citizens as a dangerous mass that needs to be controlled, and there are specific sections of the community who are identified as specific dangers to public order – namely black people, working class people and women. There is only one conclusion to this: the state is racist, classist and misogynist.

I have seen this myself, as I have a long history with the Metropolitan Police – one that I did not ask for or want.

My first ‘interaction’ with them was in 1984, when I was 16 and on a women’s picket in Nottinghamshire during the miners’ strike. I was with my mum and my aunties as we stood at the pit entrance, where the men breaking the strike would walk past, waving money at us and shouting they would pay for our food for sexual favours. The police who were protecting them were happy to encourage them and laugh along with them.

The Metropolitan Police had been bussed into Nottinghamshire in their thousands, collecting overtime money, to facilitate breaking the strike for Margaret Thatcher’s government. They were not there for anyone’s safety, as we found out; my aunty shouted “scab” and was immediately arrested, my other aunty shouted, “I hope your next shit’s a hedgehog” and was dragged across the car park to the police van, and my mum was hauled away and arrested, too.

As a vulnerable teen, I was distraught, but the police had no interest in me or my welfare and two of them pulled me across the car park away from the scene, as they drove off with my family locked in the back of a wagon. I had to make my way back home, with my knees and legs pouring with blood, not knowing what had happened to my family.

Their case was kicked out later at Nottingham Crown Court, but in the 1980s there was no justice for us. We were working-class women, supporting the striking miners and considered the enemy within.

This was my first engagement with the Metropolitan Police, but not the last. In 2015, I was at another picket in East London outside a private development which we had named ‘Poor Doors’. It was a development which discriminated between private tenants and social tenants, with the latter only having access to their building through a door down the side alley while the former accessed their apartments from the front door. It was a blatant form of social apartheid, and a group of us picketed that door for almost a year trying to bring attention to the growing normalising of discrimination in London.

In April of that year, I was arrested for allegedly putting a tiny sticker on the window of the development two weeks previously. I was apprehended by two officers and immediately surrounded by around 15 other police officers.

I was lost in a sea of yellow jackets, and my friends on the picket couldn’t see me and had no idea what was happening. I am 5ft 2inches, and had been handcuffed behind my back and dragged into a police vehicle.

The picket of 10 people was being policed by around 100 officers, and the situation was intimidating and frightening.

I arrived at Bethnal Green police station in East London where I sat and waited to be processed, still in the cuffs, which were cutting into me. It took the custody sergeant to insist I was uncuffed, asking what threat I could possibly be three hours after being arrested. It was a busy night, and even the young lads in the station who’d been arrested for drug dealing were frightened of me, asking what I’d done to be cuffed and policed so heavily. I was locked up for eight hours and released at 3am, when I had to walk home alone.

In October that year, I went to court. The eventual charge was ‘joint enterprise to criminal damage’ – that someone unknown to them and to me had put a sticker on a window and I had been present. The police admitted in court that I had been targeted, and the judge expressed his discomfort at this. Although I was found not guilty, I wanted to hold the police to account for their unfair treatment of me, but in order to do that my legal fees would have been in excess of £17,000 ($23,606). I don’t have that kind of money, and they went unchallenged.

I was arrested again in March 2017 on a picket line at the London School of Economics, where I worked, supporting cleaners who were fighting for fair pay and conditions. Again, I was cuffed behind my back and thrown in a very insecure van that sped through the narrow streets of Covent Garden. I was injured on the way to Charing Cross police station, where I was thrown in a cell next to a man who was shouting “I’m a rapist” with his door open. Apparently, he was considered so dangerous that I was unable to leave my cell to make the call I was entitled to, and an officer had to sit watching him for four hours to ensure he didn’t harm himself. After I was released, the case was ‘No Further Actioned’.

I’ve witnessed this blatant disregard for women from police time and again over the years. I’ve been on hundreds of protests, and seen women pulled from crowds, laid on their fronts with officers kneeling on them, being thrown around like dolls and treated roughly by men in full riot gear. I have suffered trauma and abuse at the hands of the Met Police, to the point I have been reluctant to go to them for help when I have been a victim of crime.

As a working-class woman from a council estate, I do not see them as public servants. I see them as state apparatus – a tool to enforce the political will of powerful interests in Westminster, ensuring that global capitalism can do business without the interference of sections of the public that are either undesirable, unable or unwilling to comply. As long as the police are intrinsically connected to and used by the state as tools to enforce a political will, no one will be safe from them – and the events of the past week have done nothing to change my mind on that front.