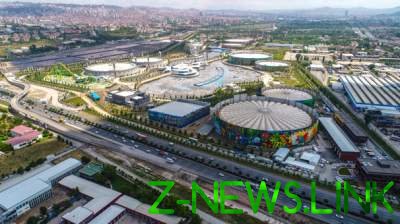 A new theme Park capital of Ankara, “Wonderland of Eurasia”, formerly known as “Unipark”, called for close 980 000 customers since its inauguration. “Despite the weekday, about 230 000 people arrived in the entertainment complex. And a few days later, the number has reached 980 000. It’s quite a serious figure,” – said the candidate in mayors from the ruling justice and development (AK Party) in the province Mehmet Ozhaseki during your visit to the Park.

“Unipark” is the largest theme Park in Turkey and, according to its founders, the largest of its kind in Europe. Built on 1.3 million square meters, the complex boasts 26 large rides and attractions 2117 of smaller size, placed 13 huge tents and in the open area. There is also a fountain, which can spray water to a height of 120 meters, Parking for thousands of cars, railway network length of 5 kilometers and solar panels, generating electricity for some areas of the Park, located in the Metropolitan area Animalle.