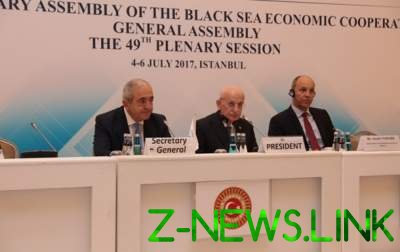 The Russian side declares “bespretsendentnoe,” and blames the incident on the Ukraine.

Russia for the first time in the 25 year history of the parliamentary Assembly of the black sea economic cooperation will not participate in the meeting of the General Assembly of PABSEC to be held in Kiev, because Ukraine as a country-the organizer has not sent the invitation to Moscow.

“What happened is completely unprecedented case when the Ukrainian side – the country-organizer – Russia was not invited, member country, the meeting of the General Assembly of the PABSEC. This is the first time in 25-year history of the PABSEC”, – complained the head of the Russian delegation, state Duma Deputy Mikhail Emelyanov.

He acknowledged that the PABSEC is a rather complex organization, it includes countries that have bilateral conflicts, “but has never been to the country, which has a sharp conflict with the other party, was not invited delegation to the meeting.”

Yemelyanov said that Russia will “closely monitor the situation at the session of the PABSEC General Assembly in Kyiv.”

“If they adopted some anti-Russian decisions, we are of course going to challenge them, including legal grounds,” he warned and added that Russia is “counting on the common position of the majority of members of the organization”.

The black sea economic cooperation organization unites 12 States of the black sea region and Southern Balkans. It was created for cooperation, peace and stability in the Black sea basin.