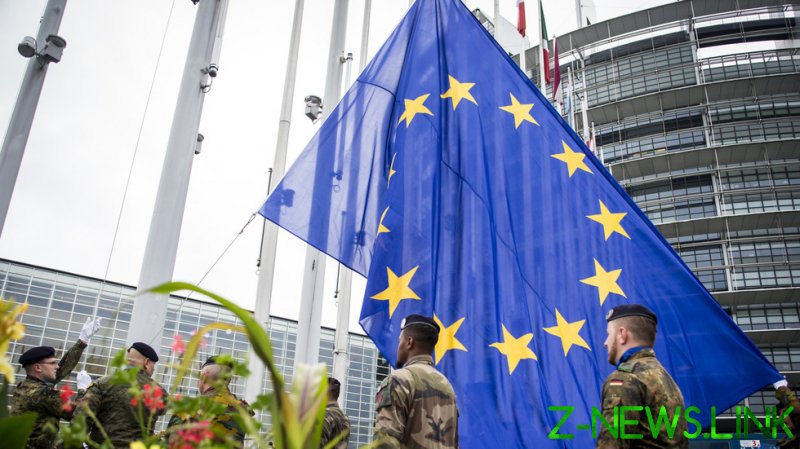 The head of the organisation’s foreign relations, Josep Borrell, has signed off on a stentorian call to – well, not arms, really, but at least “assets.” He sees his bloc at risk of “strategic shrinkage” (meaning loss of power, both economic and military) and coming up short in the “battle of narratives,” too. Indeed. What if the rest of the world really insists that “universal” values should be just that, universal, and not merely European?

There is plenty of hype and chatter, much of it in advanced think-tankese. The EU wants “resilience,” “threat environments” are peskily “hybrid” now, but “kinetic thresholds” still matter – basic bureaucracy-triage eye-glazer. If you stay awake through that kind of language, you either have a robust sense of irony or you should contemplate a job at a think tank.

There are concrete points as well. Of course, Russia and China make their appearance. For now, at least the good news is that the draft seems to treat both states with a certain, healthy restraint. It points, realistically, to areas of tension, competition, and diverging interests. But it seems to avoid the most aggressive rhetoric typical for Cold War Re-Enactors. It is possible, though, that some more gung-ho EU members, such as Poland or the Baltic states, will exert pressure to insert harsher language. Whether they succeed or not will tell us more about internal EU power plays than it will about either Russia or China.

The Compass is a laundry list, including things cyber, intelligence, information, and economic. But the most specific proposals are twofold. First, the draft Compass foresees the creation of a special EU rapid reaction force, not in one place but in a “modular” format, held together by organization and training. Its projected size of 5,000 men and women is very modest. In today’s world, this may sound a little like “300” must have sounded during the Greek-Persian Wars about 2,500 years ago.

Yet it is an idea to take seriously. Such a force may suffice to respond to limited and local crises in the EU’s neighborhood. That would be progress, if that capacity comes with a realistic foreign policy of cooperation with non-EU states, especially with Russia. A big if.

Second, this new “capacity for rapid force deployment,” as Borrell calls it, resonates with the proposal to turn the Maastricht Treaty – one of the EU’s two foundational documents – from theory into practice. In essence, the article permits the formation of coalitions of the willing within the EU. Duly hedged with conditions, this would allow the bloc to act even if only a part of its members are prepared to step up.

No doubt, these are significant stakes, at least by the low standards of the EU when it comes to efficiency, flexibility, and speed. Baby steps, but at least steps.

And yet, the real question – and it is only one – behind the EU’s security mess is actually much more important, even if there is a persistent failure to adequately address it. To understand that striking failure to focus on the (obvious) main problem, we need to take a step back and add a tiny bit of history.

Imagine a political bloc of 27 member states with almost 450 million inhabitants. It sits in a location that, for a few centuries, used to be the power center of the world – for worse rather than better – before it took itself apart in two World Wars. Since then, the place has, fortunately, lost its much-abused preeminence. It still wants to be important, however, and shape not only its own societies but the world. In principle, the bloc has what having a global say would take: it is, still, one of the wealthiest and most developed parts of the planet and it is ambitious, asserting not only its common “interests” but also “values.” Especially about the latter, as Borrell’s ruminations on “narrative” and the “universal” illustrate, the bloc is very touchy and cannot let go of its old conceit that somehow its beliefs should be binding everywhere.

And here comes the kicker. Militarily, our very ambitious bloc is in such a slouch that it cannot even defend itself without massive outside help.

That help comes – at a steep price in dependence – from the USA, a partner proven to be reliably unreliable, run by a mediocre (at best) oligarchy through a badly dated political system of lobbying and gridlock that mostly mismanages a polarized and brutally unequal society. The unhappy whole exhibits increasing instability and unpredictability.

It is also a partner who will put his own interests first, always. Sometimes in an extremely rude manner that is almost comically in-your-face-world! sadistic (former and perhaps future president Donald Trump and his noisy “America First!”) and sometimes just very brutal and incompetent (current president Joe Biden, the AUKUS humiliation of France, and the retreat from Afghanistan).

In other words, the bloc is quite unique. It combines the habitus of a norm-setting great power with the security reality of, at best, a client state. It is, really, the Walter Mitty or maybe Madame Bovary of geopolitics.

The above is the reality of the EU. Rich, proud, and loud, yet obstinately unwilling and therefore – and only therefore – unable to take care of its own security. It’s an act so bizarre that we only find it normal because we have all been socialized into this absurdity.

To be fair, it is not as if no one ever notices the problem. From time to time, harshly real events wake up politicians and think-tankers, such as when the US not only decided all on its own when and how the West’s common misadventure in Afghanistan was to end, but also staged a fulminant crescendo of self-humiliation and violence in the Great And Totally Avoidable Rout of Kabul.

Then the EU suddenly realized that it simply had no option but go along, as always, really. Because it did not even have the independent capacity to hold just Kabul airport on its own.

This truly staggering dependence on the US is, of course, a policy, an act of deliberate will – or, if you want, deliberate unwillingness. The roots of this policy reach back deep into the Cold War, to the late 1940s and the 1950s, when two things happened that, unfortunately, still shape our thoroughly post-Cold War present.

One of them is remembered well: the founding of NATO in 1949. The other is, tellingly, mostly forgotten: the decision not to also build a (then West) European Defence Community (EDC). Why that project failed is no longer important. But the consequences of that failure are.

Because, taken together, the fact that NATO did emerge but the EDC did not was a genuine historical turning-point. If the EDC had also come into existence, there would at least have been a decent chance that we would live in a different geopolitical world now. Namely one, where the EU and America might well still be allies (inside NATO), but, at the same time, the EU would also – as would be simply normal – have its own autonomous ability to defend itself, and its much-invoked “interests” and “values.”

And this brings us back to the present and its great discontents. In typical fashion, Borrell insists that, whatever else may happen, the EU’s “Compass” “in no way contradicts Europe’s commitment to NATO which remains at the heart of our territorial defense.”  To then add that “this commitment should not prevent us from developing our own capabilities and conducting independent operations in our neighborhood and beyond.”

Yet this is precisely the circle that cannot be squared, the issue that cannot be fudged, as Borrell may actually know but be unwilling to admit. There is a principal contradiction between relying on NATO, i.e. the US for the very core of EU security, the defense of its territory and dreaming of settling problems beyond its borders: An EU (still) too weak to even defend itself, yet strong enough to intervene abroad is a perverse idea. Worse, it is not viable.

But establishing real independence from the US would also presuppose the courage to define the bloc’s foreign policy goals in analogy to how the US defines its, whether noisily or loudly: by reference to European interests first. And that would require an independent EU policy especially toward both Russia and China (and Israel as well, for instance).

The EU is very far from that. Its elites have been raised and trained to be psychologically unable to even think through the implications of such a stance. And if anyone merely hints at it – usually the French, from de Gaulle to Macron – the rest of the bloc makes sure the issue dies in committee, at best.

But as long as the EU does not finally face this basic question, all its plans are doomed to fail in over-reach. Time to get real: If you want to stay too weak to have your own foreign policy or defend your own territory without help from the USA, you won’t be in a state to impress anyone beyond your borders. First, learn to walk, then, maybe, one day, you will be able to run.