Home / business / The drivers on avtonomera threaten to block airports

The drivers on avtonomera threaten to block airports 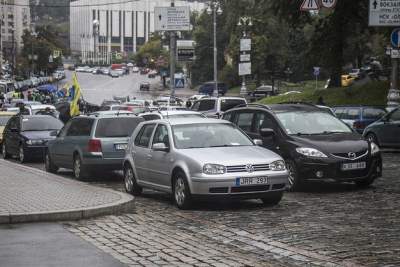 Car owners on avtonomera declare their intention to make the action indefinite.

Car owners on avtonomera, who staged a protest in downtown Kiev, and declare their intention to make the action indefinite.

According to activists of the public organization Autoeurosale, the shares is expected to more than 5 thousand participants.

In the future, they plan to block roads to the airports in Borispol and Zhulyany, as well as all main roads on the territory of Ukraine.

Motorists from all regions of Ukraine intend to demand from the Verkhovna Rada to adopt a bill that will allow the customs clearance of their cars and reduce the tax burden on importation of all used-shnyh of foreign cars in the country.

Also they will demand the resignation of the head of the State fiscal service of Miroslav Prodan, head of the interior Ministry Arsen Avakov and the Prime Minister Volodymyr Groysman.

In the morning in the center of Kyiv car owners on avtonomera blocked the government quarter, the street Hrushevskoho and the European area. Due to large-scale protest in Kiev to a traffic jam.

It is worth noting that from July 5, the national police were able to track the duration of stay in Ukraine of vehicles on avtonomera and apply sanctions to violators.