Home / business / The business Ombudsman said about the Windows broken during the protests.

The business Ombudsman said about the Windows broken during the protests. 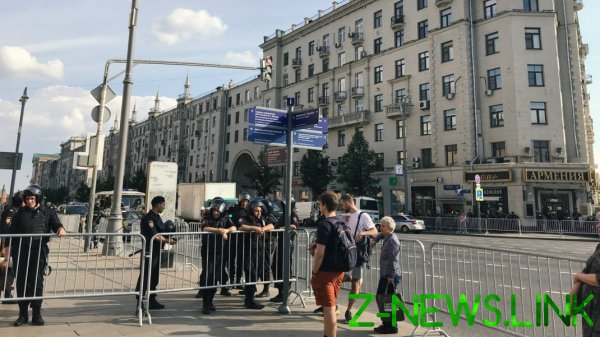 The business Ombudsman said about the Windows broken during the protests. This is only a “figure of speech,” says her assistant

Capital entrepreneurs are afraid to write statements about the damage obtained due to a protest on 27 July and 3 August, said the radio station “Moscow speaking” Commissioner for the protection of the rights of entrepreneurs of Moscow Tatyana Mineeva. “[Business people] come to me “non stop” and talking about the amounts that they pay for these doors, for broken glass,” she said.

In such cases, the entrepreneurs tell only orally, Mineeva says. “I asked each write a letter. But until such appeals, I have not,” — said the capital’s business Ombudsman.

About broken doors and Windows during the opposition rallies earlier nothing was reported. “Open media” tried to ask Mineeva to talk about these cases, but she ignored our calls.

Its press-Secretary Alexey Lamps in conversation with “Open media” admitted that the words of a French on broken glass was rather a “figure of speech”. He confirmed that at the Moscow office of the business Ombudsman are calling with complaints about damage to property and loss of profits. “Tell me what it is and where it is, we can’t confirm this fact no. Just calling emotionally,” — said LAMPE.

A French representative suggested that businessmen “are afraid of the fate of the restaurant “Armenia,” which drew a sickly campaign of cyberbullying”. He noted that the words about bullying is his personal assessment.

Restaurant “Armenia” at the intersection of Tverskaya street and the Tverskoy Boulevard in mid-August filed in Tushino court of Moscow the claim for loss of profits 550 thousand rubles to Alexey Navalny, Lyubov Sobol, Ilya Yashin, Julia Galiamina, Vladimir Milov and Ivan Zhdanov. The first hearing on the lawsuit will take place on September 18.

Supporters of the unregistered candidates their reviews greatly underestimated the ratings about the restaurant negative reviews on a number of services, including a page in Facebook. The restaurant then closed his page in the social network.

In addition to the “Armenia” claims to unregistered candidates filed Mosgortrans, the Moscow metro, GBU “highways” and “Mr. taxi”, which has contracts with government agencies and owned by businessman Vasily Saushkin, “Open media” wrote about it in detail.

Previously, the TV channel “Rain” reported that the owners of the shops and cafes in the city center before an opposition action on August 3, received from the mayor’s office recommendation to “take precautions until the complete cessation of work” because after the March on 27 July, “from the business community received numerous complaints about the caused material damage and the impossibility to provide security”.