Home / business / The building of the interior Ministry, clashes broke out between activists and police

The building of the interior Ministry, clashes broke out between activists and police 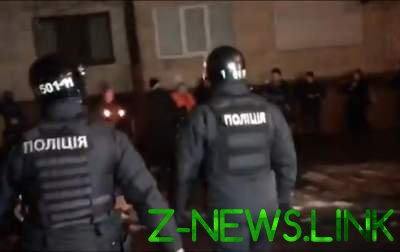 In Kiev, near the building of the Ministry of internal Affairs, Akademika Bogomoltsa, there were clashes between the participants of the torchlight procession and police officers.

As noted, the conflict arose after attempts by the protesters to put up a tent near the building of the Ministry on the roadway.

Law enforcement officers stepped in, pushing the protesters from the interior Ministry building to the corner of streets of the Academician Bogomolets and Pylyp Orlyk.

In response, the protesters threw snowballs at police officers. Then militiamen began to detain people who were throwing snowballs.

After the clashes one of the protesters set fire to a Molotov cocktail, but when the police tried to catch him, he threw it away and ran.

In the future, the militiamen pushed the protesters from the corner of streets of the Academician Bogomolets and Pylyp Orlyk to the monument of Pylyp Orlyk, which is located on Lipskaya street.

As stated by one of the organizers of the rally, the leader of the Coalition of participants of orange revolution Sergey Melnichenko, the police arrested four of the protesters. The detainees were taken to the Pechersk rayupravleniya police of Kiev, where now are the participants.

We will remind, on the independence square started the procession of activists with the requirement to complete the investigation of dispersal in the night from 29 to 30 November 2013.