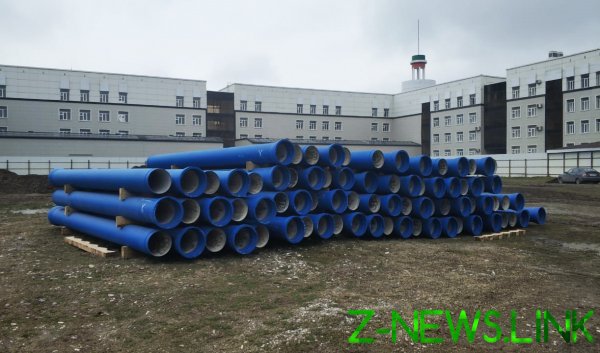 In the implementation of the largest and prestigious project in the North Caucasus region – the construction of a shopping Mall “terrible Mall” use the most modern and technically effective materials, and even where they apply, at first glance, unnoticed.

For example, for sanitation of the complex, the builders chose a heavy-duty cast-iron pipe brand LTK “Free Falcon.” And here’s why.

“Terrible Mall”promises to be a wonder of architecture, efficiency and style. Total area of shopping Mall will amount to 132 thousand m2 (rent — 59 thousand m2). Its membership will include a grocery hypermarket, a shopping gallery with more than 150 stores, shops of home appliances and electronics, Homeware, Department stores, children’s and sports goods, and food court on nine concepts, 10 cafes and restaurants. In the entertainment area of the complex will be a multiplex cinema, a bowling alley and a large children’s centre. The project provides underground Parking for 1 thousand cars. The catchment area of the complex will amount to about 5 million people.

Moreover, the “terrible Mall” will be combined with a large Park Kausar (20 ha) and IFC “Akhmat tower” (this will be the first skyscraper in Europe, built in an area of high seismic activity) in a single architectural complex. The result is a unique place of attraction for tourism and business in the center of the Chechen capital.

In August of 2017 during a ceremony of pouring concrete in the Foundation of the complex, which was timed to the 66th anniversary of the birth of the first President of the Republic Akhmad Kadyrov, the adviser to the head of Chechnya, state Duma Deputy Adam Delimkhanov called the complex a unique project that has no analogues in the entire South of Russia, in its complexity and scale included in the top 20 of the best projects around the world.

All this adds to the facility of such a high class high requirements, both from the point of view of construction technology and the choice of building materials. In particular, the availability of the newest systems of water, heat and electricity is one of the most important factors assigning the class object “A”.

Large developers, cherished reputation, follow the demand and invest in tested and high-quality materials. This applies not only to drinking water that is clear and obvious to all, but also for Sewerage systems – Sewerage system.

How reliable and high-tech the Sewerage network depends on the health and environmental well-being areas for development. A competent developer understands, which is extremely important at the stage of construction to ensure the reliability of pipelines of Sewerage for the safe transport of dirty waste water without leaks. Otherwise, the high status of the object can be forgotten.

The problem of dirty drinking water and spills of industrial and domestic wastewater in Russia today is very serious. And the city of Grozny in this respect no exception.

According to the “Program of complex development of communal infrastructure of city district “the City of Grozny” for 2017 godset sewage in it “is in poor condition. Physical deterioration of the main structures of centralized sewage is about 90%”.

In addition, the document says, the current state of systems characterized by a high percentage of wear of sewer networks, the lack of reserve bandwidth trunk sewers, congested networks and structures.

This means a constant and very serious threat of leakage of hazardous wastewater through worn-out pipelines of sewage systems, resulting in not only damage to the environmental well-being of the environment through soil contamination, but also the risk of mass poisoning of the population through infiltration of pollutants into the pipelines of drinking water.

In this respect, the trend that demonstrates a Moscow developer in the construction of shopping Mall “terrible Mall” for the Chechen capital is very significant and important. Choosing to Sewerage material of the highest class – a tube of high-strength cast iron with nodular graphite (ductile iron), the developer provides the facility of a reliable system of wastewater disposal for more than 100 years, and that is the warranty on your product gives the manufacturer of these pipes in Lipetsk pipe company “Svobodny Sokol”. Also, when using ductile iron pipes is provided virtually trouble-free operation of networks, minimizing the cost of their operation and maintenance and, finally, the environmental impact due to the complete integrity and reliability of pipelines.

For a project of shopping Mall “terrible Mall” from Lipetsk were delivered to 570 meters of pipes from ductile iron with a diameter of 400 mm. This means that are built by using the object matches the criteria of construction, now adopted in all the developed cities of the world.

Grozny today is rapidly developing and changes. But for the luxury appearance must be the hi-tech stuff. It makes sense to follow the example of such “pearls of the East”, Singapore, Istanbul and Hong Kong. You need not only the status of objects such as the shopping Mall “terrible Mall”, but in General water and sewer network of the city to build the highest quality, durable and reliable pipe materials, can provide the highest level of municipal service for urban residents. Given the above statistical indicators of the condition of the infrastructure this task is formidable for more than relevant.