Home / WORLD / The 2nd US Civil War has already been fought and won, turning the Republic into ‘Our Democracy’

The 2nd US Civil War has already been fought and won, turning the Republic into ‘Our Democracy’ 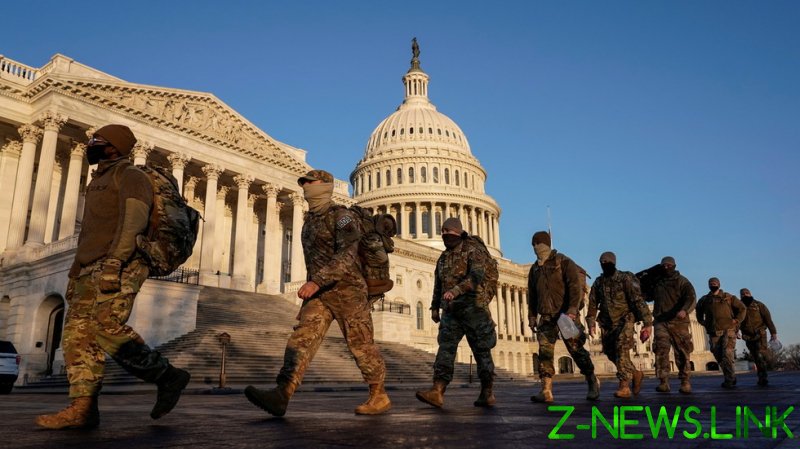 Just look at the glamour photos of House Speaker Nancy Pelosi (D-California), reviewing the National Guard troops at the Capitol on Wednesday. Does she look scared for her life – as the congressional Democrats have claimed in the aftermath of the “insurrection” last week – or like a leader of the winning faction relishing her triumph?

In voting to impeach President Donald Trump on Wednesday – even though he has but a week left of his term – the Democrats invoked the same language used to outlaw the defeated Confederates in 1865, insisting that those who engaged in “insurrection” and “rebellion” should be barred from public office forever. This doesn’t mean just Trump, but everyone who ever supported him, too.

This rhetoric makes zero sense coming from a political party that supposedly seeks to unite the country, cool the partisan passions and peacefully transfer power. Coming from the winners of a war, however, it’s a whole different story.

Meanwhile, the Republicans who opposed the impeachment – aside from the 10 members of the Liz Cheney caucus, who defected to the Democrats – kept invoking Lincoln, all about “malice towards none” and “charity for all.” Supposedly a plea for unity, it sounds unmistakably as a plea for mercy from the vanquished.

As to what kind of mercy the conquered can expect, it’s more likely to resemble that of Genghis Khan than of Lincoln. The Mongol conqueror was invoked by none other than Barack Obama, in another sycophantic Atlantic interview back in November. It seemed puzzling at the time, but obvious in retrospect: Obama knew there was a war on.

Instead of physical battlefields, this conflict took place in the narrative space. Violent “but mostly peaceful” protests are the closest it came to the ‘kinetic’ level. Mostly it was a battle for hearts and minds, a series of psychological operations that played out on the media, political and economic fronts, with the general population – and arguably, the Republicans – none the wiser until it was all over. Call it a ‘fifth generation’ (5G) battle, where the objective is to defeat the enemy before they even pick up a gun, convinced that the age of civil wars is over.

The starting point may have been the summer of 2016, when Hillary Clinton commissioned the ‘Steele Dossier’ to accuse Trump of “collusion” with Russia – and blame Moscow for the DNC’s dirty laundry getting aired all over the internet. While it failed to get Clinton elected or prevent Trump from taking office, it opened a battlefront that eventually delivered results.

‘Russiagate’ was used to spy on Trump’s campaign, through the fraudulent FISA warrants against Carter Page. It also served to throw the White House off balance, by ousting General Michael Flynn, and get the Mueller probe launched on behalf of fired FBI director Jim Comey. It was allowed to fizzle out only after the 2018 midterms delivered the House to Pelosi.

Determined to impeach Trump over something, the Democrats then latched on to the Ukraine phone call. That plan, too, hit a snag when only Mitt Romney turned out in the Senate to greet them as liberators. No matter. Within weeks, a novel respiratory virus that emerged in China would present a new opportunity. “You never want a serious crisis to go to waste,” as Barack Obama’s chief of staff Rahm Emanuel once proudly said.

Trump was blamed for both opposing the coronavirus lockdowns and the economic hardship inflicted by them, at the same time. Every single American death was somehow his fault, while governors who sent the infected into nursing homes and killed thousands were celebrated as heroes – so long as they were Democrats. Another hot summer of racial grievances, a replay of 2016, was used to endlessly repeat the tropes painting Trump as a racist, fascist, Nazi dictator.

There was one more thing Russiagate was used for – to neutralize social media, censoring legions of Trump supporters (and in the end, Trump himself) under the guise of fighting “Russian bots” and “misinformation.” In 2016, Trump had been able to leverage the platforms to bypass the mainstream media gatekeepers and communicate with millions of Americans directly. So the Democrats moved to deny him that – and Silicon Valley, already sympathetic to them politically, eagerly delivered.

By the time the New York Post was censored over the Hunter Biden laptop story – openly, brazenly, and without any fallout – the situation on that front should have been obvious. Both social and legacy media had declared, by fiat, that new rules for mass mail-in ballots were “safe and secure” and anyone saying otherwise was a “denier.” Trump and the Republicans protested this was unfair, but did nothing, still believing they were dealing with a political process within the system operating under the old rules.

With their total control of the media, it was trivially easy for the engineers of global ‘color revolutions’ to derail and spin a ‘people power’ event like Trump’s January 6 rally and present it as another Fort Sumter – or better yet, Pearl Harbor. Because, as you might have guessed by now, they believe what happens doesn’t matter, only the narrative they create about it.

The Capitol unrest was way too disorganized to be a coup d’état, but narrative management turned it into a coup de main. And though the Republican Party and Trump himself surrendered in its aftermath, the “impeachment” is supposed to be the coup de grace.

You may complain that it does little to unify the country, or calm the concerns of half the population. They don’t care. They believe might makes right and act as if they just fought and won a war, not against fellow Americans but a group totally illegitimate and irredeemable. Deplorable, if you will.

There is an odd phrase that Democrats and their media allies have used a lot over the past few years: “our democracy.” It’s never explained or defined, but has simply become a stand-in for the United States of America. On paper, the US remains a constitutional republic – just like on the surface, there never was a war. Yet there is no more talk about the Republic, only “Our Democracy,” the same way the US went from plural to singular after 1865.

History never actually repeats itself, but sometimes it does rhyme