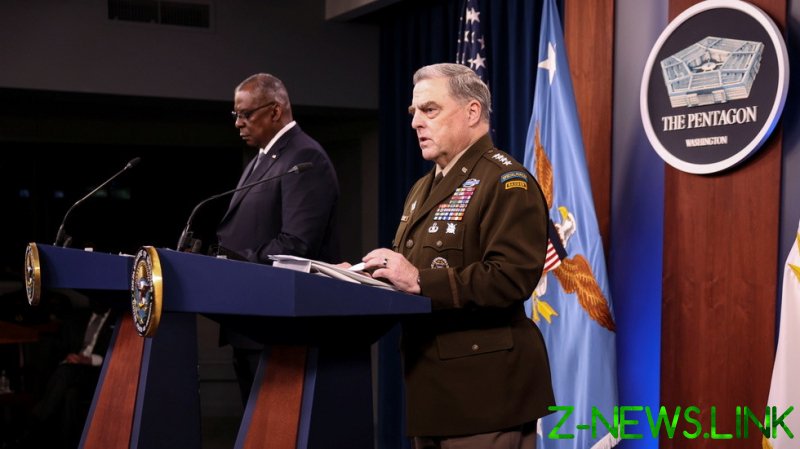 Defense Secretary Lloyd Austin and Chairman of the Joint Chiefs of Staff General Mark Milley spoke with reporters at the Pentagon on Wednesday, echoing the official line that the Kabul airlift was a success and that the Afghan War was officially over.

“I will always be proud of the part that we played in this war,” said Austin, who commanded troops in Afghanistan and Iraq before retiring in 2016 and joining the board of missile manufacturer Raytheon. “But, we shouldn’t expect Afghan war veterans to agree any more than any other group of Americans. I’ve heard strong views from many sides in recent days. That’s vital. That’s democracy. That’s America.”

Answering a reporter who asked about his own feelings, Austin said that “people will process this differently,” and urged everyone who might need mental health counseling to seek help. “We need to respect each other’s views and be supportive of each other.”

Milley said his own “pain and anger comes from the same as the grieving families” and wounded soldiers, as he lost 242 soldiers under his command, “walked patrols, been blown up, shot at, RPG’d and everything else.”

Milley has faced criticism this summer after telling Congress that he supported the teaching of Critical Race Theory in the military in an effort to understand ‘white rage’ that he said drove the January 6 riot at the US Capitol.

Questions about pain and anger came as a number of Afghan War veterans voiced their frustration with the way the Pentagon handled the US exit from Kabul, including the loss of 13 troops – 11 Marines, one sailor and one soldier – in a suicide bombing last week. Several of their family members also raged at President Joe Biden, feeling disrespected by him at the ceremony to greet their coffins over the weekend.

It wasn’t just families or veterans venting their frustration, however. USMC Lieutenant Colonel Stuart Scheller, who was relieved of his command for publicly demanding accountability for the botched withdrawal, announced on Tuesday he intends to resign his commission by September 11.

Scheller also said the American people were seeking accountability and leadership and “WILL take it,” adding that “Every generation needs a revolution.”