Home / WORLD / Texas truckers face charges for smuggling HUNDREDS of migrants, but others just WALK across

Texas truckers face charges for smuggling HUNDREDS of migrants, but others just WALK across 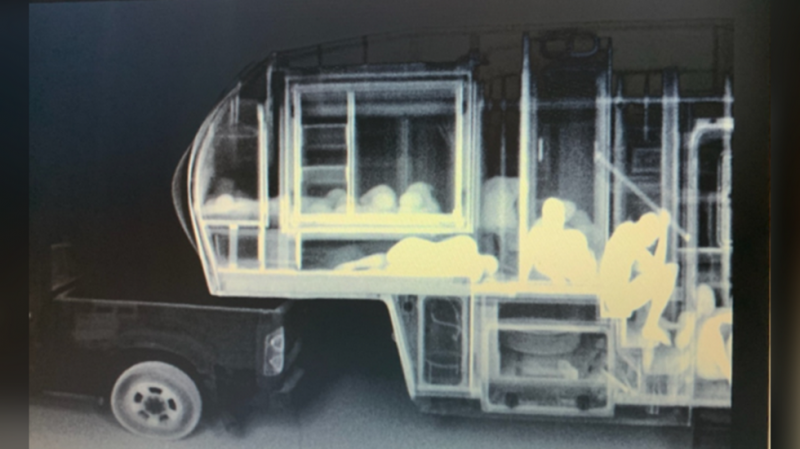 Marc Anthony Bane, 45, and Tara Renee Dillon, 33, were taken before a US magistrate judge on Thursday to answer charges of attempting to smuggle 89 migrants in a tractor trailer, the US Justice Department said.

The day before, the same judge heard the charges against Michael Warren Mccoy, 43, caught with 115 migrants in a refrigerated trailer.

Bane and Dillon were caught when a Border Patrol service dog in the Laredo sector noticed a smell coming from the truck stopped at a checkpoint on Interstate 35  in the middle of the night – only for agents to discover the migrants sweating profusely inside. Mccoy was pulled over by police on Highway 59, for failing to stay in a single lane.

The DOJ did not say when the two incidents took place. Trailer smuggling seems to be a trend, as earlier this month the Border Patrol arrested three US citizens and 74 migrants, being smuggled in two trailers, in the Big Bend sector of Texas.

Bane and Dillon allegedly expected to be paid $1,000 for the run. Charges against Mccoy allege he expected to be paid $250 for his human cargo – and that he made three such trips previously. All three face up to 10 years in federal prison and a fine of up to $250,000, if found guilty.

Tractor trailers are a particularly risky way for migrants to try and cross borders illegally, especially in the summer heat. In July 2017, nine migrants from Latin America were found dead inside a trailer that ended up abandoned in a San Antonio Walmart parking lot. In one of the worst cases in recent history, 71 migrants were found dead of suffocation and heat in Austria, in August 2015.

Hundreds of migrants cramped into trucks and trailers are a drop in the tide currently crossing the US-Mexico border, however. The Border Patrol says almost 1,000 people a day cross from Mexico just in Del Rio, Texas. Many of them are from Haiti and African countries, according to Fox News reporter Bill Melugin who documented their arrival on Thursday.

The Biden administration insists that the surge in arrivals is seasonal, or caused by climate change, violence and poverty – but not in any way by their revocation of the Trump administration’s immigration policies aimed at discouraging illegal immigration.