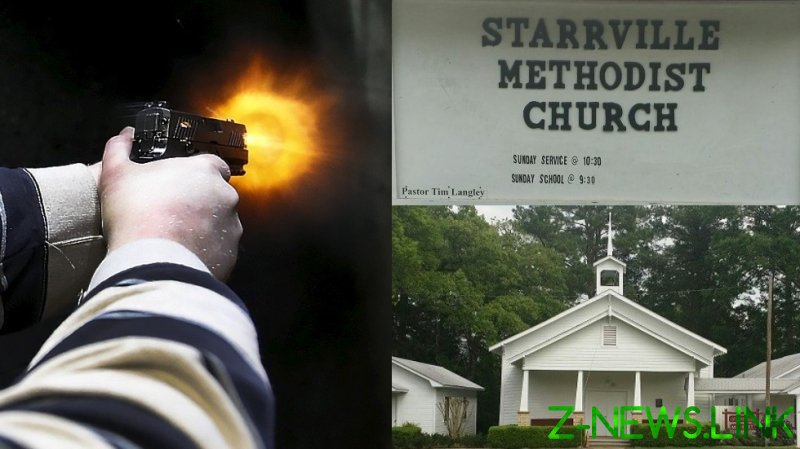 The pastor opened a stall in the bathroom of Starrville Methodist Church in Winona, Texas, on Sunday morning to find a man hiding inside. The suspect, identified as a 21-year-old black man, had been involved in a car chase with police the night before, the Smith County Sheriff’s Office told local media.

The pastor was armed and pointed a gun at the man, but was overpowered and shot dead with his own weapon. The suspect then fled the scene in the pastor’s car, reaching speeds of 120 miles per hour, before he was stopped in nearby Marshall.

He was arrested, and treated for a gunshot injury to his own hand. The sheriff’s office said that two more people were injured, one by gunshot and another who sustained injuries from a fall. Services were not being held in the church at the time of the shooting, the United Methodist Church said in a statement.

According to a Smith County Sheriff’s Office spokesman, the suspect will be charged with capital murder.

Located about 100 miles east of Dallas, Winona has a population of just over 500 people and is rarely in the news. However, a grisly murder-suicide there in 2019 made national headlines, when a husband, wife and eight-year-old daughter were shot dead in their home.

The Winona shooting came just over a year after a gunman stormed a packed church in White Settlement, just 150 miles east of Winona. The attacker killed two churchgoers but was immediately killed with a single shot to the head by an armed member of the congregation, who happened to be a gun instructor.