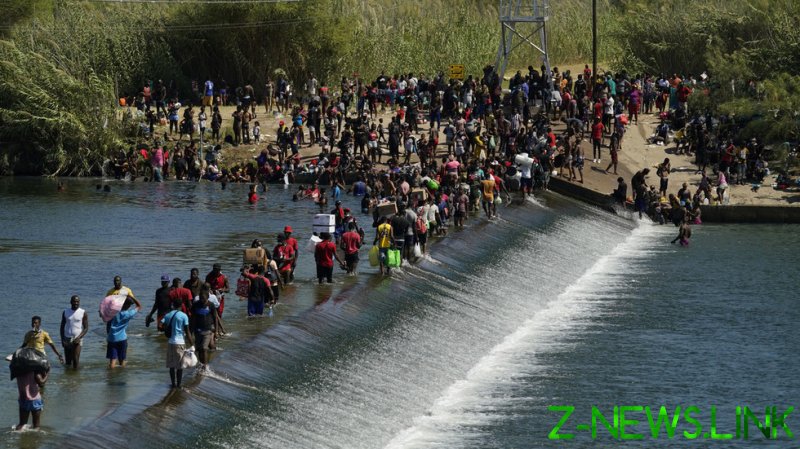 The international bridge in Del Rio, Texas attracted national attention after drone footage showed thousands of people, most of them migrants from Haiti, flocking underneath it while they waited to be processed. Adding to the furore was a Thursday decision by the Federal Aviation Administration (FAA) to ground all drones in the area for two weeks, citing “special security reasons.” Critics of the Biden administration took it as a blatant attempt to downplay the situation.

Whether true or not, taking spectacular images of migrant crowds from air remains quite possible in Del Rio, as a Fox News correspondent proved on Saturday. Bill Melugin and his crew were given a ride by the Texas Department of Public Safety. State authorities are among those accusing the federal government of mishandling the migration crisis.

“This time two days ago, there were just over 4,000 people. There are now upwards of 11,000. We are talking nearly a tripling of the numbers in just 48 hours or so,” he said in his report as the chopper circled near the Rio Grande. “You can get a broader perspective from the air right here of how many people are constantly streaming in.”

On his Twitter account, the reporter thanked DPS pilots for stepping up “while our drone was grounded by the feds.” He said the drone has since been cleared by the FAA to fly, after the news network asked for a waiver.

Del Rio is one of three dozen crossing points along the Texas-Mexico border. Under the current migration policy, people coming over illegally may submit themselves to arrest, hoping that they would then be released into the community and wait for their case to be reviewed by an immigration court.

The Biden administration revived the Obama-era ‘catch and release’ approach, reversing the Trump-era crackdown on illegal migrants. The decision was vocally opposed by governments in southern states, which complained that it caused a sharp rise in crossings and strained their ability to deal with the inflow.