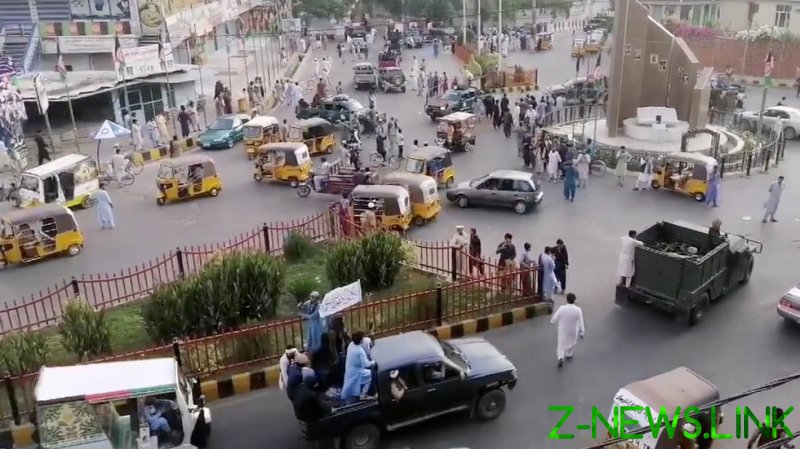 Jalalabad is the capital of Nangarhar Province and the fifth-largest city in the country, with a population of over 350,000. Its capture gave the Taliban access to an important highway, which connects landlocked Afghanistan to the city of Peshawar in Pakistan.

“There are no clashes taking place right now in Jalalabad because the governor has surrendered to the Taliban,” a local official told Reuters, insisting that “allowing passage to the Taliban was the only way to save civilian lives.”

“We woke up this morning to the Taliban white flags all over the city,” a Jalalabad resident told AFP. “They entered without fighting.”

The seizure of the city followed negotiations between the Taliban and the elders, with the group agreeing to provide safe passage out of Jalalabad to government officials and security forces.

After the capture of the northern city of Mazar-i-Sharif late on Saturday – also with few shots being fired – Jalalabad remained the last major urban area besides Kabul under the control of the Afghan government. President Ashraf Ghani and his cabinet now remain encircled in the capital, with Taliban fighters being just 50km away from the city.

In his address to the nation on Saturday, Ghani didn’t show any signs of giving in to the demands of the militants, who insist that he must resign before any peace talks can begin. Instead, the embattled president spoke about “re-integration” of the country’s crumbling military in order to keep fighting.

Earlier this week, an unnamed US official shared an intelligence assessment with Reuters, saying that the Taliban could “isolate” Kabul within 30 days and seize the city in three months. However, the events on the ground in Afghanistan appear to be developing much faster than that.

The Taliban has launched a large-scale offensive across Afghanistan amid the withdrawal of US and NATO troops from the country after a two-decade-long presence. The pullout is scheduled to conclude by August 31. The militants needed just a few weeks to take control of most of the Afghan territory as the resistance of government forces dwindled with every new victory by the group.

Western governments have been hastily removing their embassy staff from Kabul in recent days. On Saturday, US President Joe Biden authorized the deployment of 5,000 American troops to ensure a safe evacuation. He said that the Taliban had been warned that any attempt to harm the personnel “will be met with a swift and strong US military response.”

The militants claim their rapid military gains indicate that they have popular support and insist that they pose no danger to foreign diplomats and aid workers.