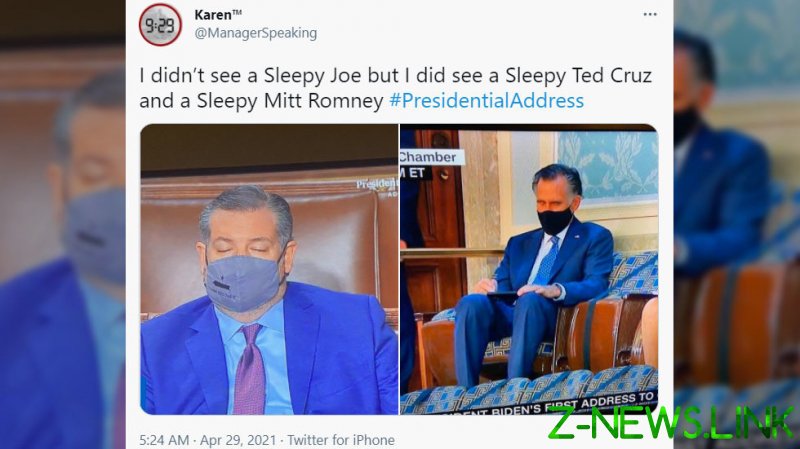 As Biden spoke about raising the minimum wage to $15, Democratic members of Congress stood up to applaud. Mitt Romney, however, was caught sitting with his eyes seemingly closed.

During another part of Biden’s speech – about the southern border – Ted Cruz’s eyes could be seen firmly closed before the senator opened them for a few seconds, showing his tired eyes, and then closed them again.

Supporters of Biden on social media responded by calling the two senators “Sleepy Mitt” and “Sleepy Ted,” in reference to the former President Donald Trump’s “Sleepy Joe” nickname for Biden.

Several users joked that Cruz was dreaming of Cancun, Mexico, where the senator controversially flew with his family in February as his state of Texas suffered from a huge snowstorm that left people without heat and electricity.

“Here’s exactly how much @SenTedCruz cares about the southern border,” radio host Randi Rhodes commented, while former US Secretary of Housing and Urban Development, Julian Castro, tweeted, “Ted Cruz is taking a siesta at tonight’s Biden speech, asleep on the job as usual.”

One user, however, accused Cruz of “playing journalists” by “pretending” to fall asleep in an effort to get news coverage.

As for Romney, social media users called the senator “heartless” and “greedy,” and claimed he was falling asleep due to his “privilege” and opposition to raising the minimum wage.

Others claimed Romney was awake and merely looking down at his phone – an argument backed up by the fact that Romney’s phone screen could be seen glowing in the clip.

The senators wouldn’t be the first people to fall asleep during a speech by a sitting US president. In 2015, former Supreme Court Associate Justice Ruth Bader Ginsburg was filmed napping during President Barack Obama’s State of the Union Address. Ginsburg, who was 81 then, later explained in a joking tone that she had not been “100 percent sober” during the speech.