Home / WORLD / Tainted justice? Jailing of a Canadian ‘spy’ in China is a result of US desire to drive a wedge between Ottawa and Beijing

Tainted justice? Jailing of a Canadian ‘spy’ in China is a result of US desire to drive a wedge between Ottawa and Beijing 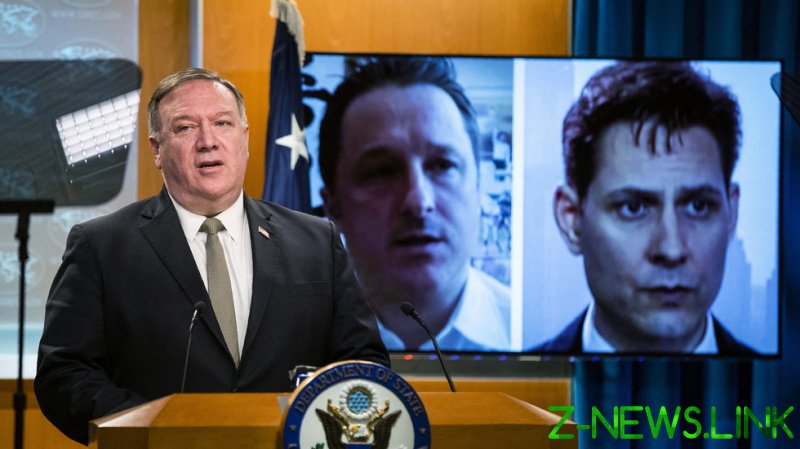 Over the past few days, China has handed down sentences for Canadian nationals detained in the country for various misdeeds. One of them is being sentenced to death for smuggling drugs – nothing particularly unusual in an Asian context – while the other is accused more ambiguously of ‘espionage’.

This latter case, the jailing for 11 years of businessman Michael Spavor for spying, has long been perceived as a retaliatory measure for Canada’s detention of Huawei CFO Meng Wanzhou, whose extradition case is coming to a close soon. The Canadian Prime Minister Justin Trudeau has condemned the sentence. This is not an unreasonable thing for him to do, yet that does not mean that his assessment of the situation is not biased along ideological and geopolitical lines.

For that matter, commentators seem to actively ignore or underplay the role of the United States in having created this drama. They also dismiss the painfully obvious reality that Meng’s arrest on behalf of the Trump administration was a bad faith, politically motivated stunt as part of a broader US effort to destroy the reputation of Huawei and to simultaneously drive a wedge between China’s relationship with Canada.

This dynamic is almost completely dismissed in favour of the one-sided mantra of depicting Canada as a victim of Chinese tyranny and presenting its legal system as completely illegitimate. The scores of Western diplomats who hoarded outside of the court today as a publicity stunt sends an insulting message to China which stirs historical memories, and is an important part of the context as to why Beijing reacted the way it did. This context is important to a balanced understanding.

The United States is a master of playing ‘wedge politics’ – that is, taking actions to drive divisions between two countries and create enmity, all in the US’ favour. Let’s turn the clock back to 2018. In this year, the Trump administration were making their very first moves to reset America’s relationship with China and to change the international context towards systemic competition.

As is the case today, they wanted other countries to ‘take sides’ with them. However, this was easier said than done. A lot of countries in the West were in fact perfectly happy having broad ties with China, which had diluted the influence of the United States considerably.

America needed a specific geopolitical pivot that would force Canada to take its side, and saw its opportunity in Huawei; the US launched a campaign against the company to discredit it, get allied countries to ban it from their 5G networks, and destroy its international reputation.

CFO Meng Wanzhou, the founder’s daughter, who lived in Vancouver, was one of the targets and in November that year, Washington filed an extradition request to Canada accusing her of “fraud” in bypassing US unilateral sanctions over business with Iran.

The move was explicitly political. Trump himself even once said she was a bargaining chip, and Canada’s own ambassador to China at that time also said it was, comments which forced him to resign, a clear indication of which direction Trudeau chose.

China, unsurprisingly, retaliated against what they perceived as an act of aggression by Canada at the behest of the US. Not long after, this resulted in what is understood to be ‘retaliatory’ arrests of the “two Michaels” on claims of espionage, (Spavour, and Michael Kovrig, who has yet to be sentenced), as well as some trade sanctions.

It is not prudent to comment on the merits of these cases, not least because I know one of the men, but the fallout of the issue has seen relations between Canada and China sour, which has pushed Ottawa further into the US camp.

Beijing’s retaliation is seen as inappropriate, but it is erroneous to frame them as the aggressor here given the obvious and explicit geopolitical motives of the US in starting all this, which Canada has willingly stepped into and complied with. Ottawa had ‘taken a side’ with the US, just as Washington hoped it would do.

But this also underscores the logic of China’s response and how the world perceives it. It is a longstanding reality that the West simply does not accept or respect the legitimacy of China’s judicial and legal system. This has a historical precedent that is rooted long before communism came around.

When European Empires forced their will on China in the 19th century, they pursued a practice called ‘extra-territorialism’, whereby their nationals in China were exempt from local laws and only held to account under their own laws, disregarding Chinese sovereignty and receiving ‘special treatment’ for themselves, because, they argued,  the Chinese legal system was backwards and barbaric.

This historical experience has influenced how Beijing approaches the subject of law and order, as well its diplomacy towards Western countries on these matters. Meaning that while it is not unreasonable to recognise that there is a political aspect in China’s declaration of these verdicts – it would be naive to deny it – context is needed.

Although the practice of extra-territorialism in China is over, nonetheless the overlying mindset of ‘Western law is superior’ and ‘Chinese law is inferior’ continues to shape interpretation of these present issues, and the unfair brandishing of Beijing as a one-sided aggressor.

Apparently, only China conducts ‘hostage diplomacy’, so to speak, not Ottawa or the US, who pretend in pursuing this case that their systems are perfectly legitimate and had no malign intentions whatsoever in the prosecution of Meng, despite evidence to the contrary.

The case of the Canadian drug smuggler, Robert Lloyd Schellenberg, who was found with over 224kg of substances, has less ‘ambiguity’ around it, and is a more clear-cut case of how China is being treated unfairly here. The West protests that his sentence is politically motivated (despite almost all countries in Asia having the death penalty for this crime) and frame it in the light of the Huawei saga, as if to assume China’s own legal system and sovereignty counts for absolutely nothing.

China’s legal system is, of course, controlled by the Communist Party, but why is all the media coverage in the West happily and blissfully ignoring the fact that this entire saga stems from a very malicious political stunt by the United States?

The Trump administration disregarded the rule of law on countless occasions and even tried to overturn an election result – so how can America’s allies so readily overlook all this in their reactions to the Meng drama? It is as if nothing the West ever does or says in relation to China ought to have consequences in how Beijing reacts. China is frequently framed as the aggressor for reacting to the hostility sent in its direction.

We hear exclusively about the overbearing Communist State punishing Canadians indiscriminately, and not about the power-hungry hegemon who used extradition laws to wage a geopolitical crusade against Beijing. China is not acting in a vacuum here, this is a reciprocal process. Its actions may be inappropriate, but they are not in fact “irrational,” and nor should they be taken out of social and historical context.