Svitolina and Tsurenko in Brisbane successfully opened a new season 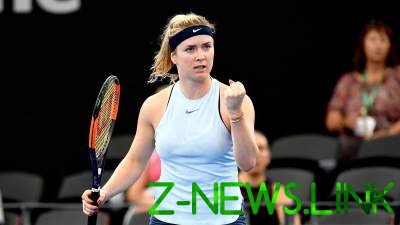 The leading Ukrainian tennis players at the WTA Premier event in Brisbane conducted the first matches of the new season.

The first racket of Ukraine Elina Svitolina in 1 hour and 29 minutes understood with the experienced Spaniard Carla Suarez-Navarro. A native of Odessa made four breaks in a single missed game on his serve. On account Svitolina 11 aces and saved 5 of 6 break points.

Lesya Tsurenko has started the season with an impressive victory over 17-th racket of the world Ashleigh Barty. From Kiev made three breaks, and his serve is not allowed Barty to even get to the break points.

To support a victorious initiative Svitolina and Tsurenko are unable Ekaterina Bondarenko, came to the main draw of Brisbane through the qualification. After lost the first set in the second set, Bondarenko was leading 5:2, but managed to lose five games in a row.

Elina Svitolina in the second round of the tournament in Brisbane will play with the representative of Croatia Ana Groom and Lesia Tsurenko will meet the Kaia Kanepi (Estonia).