Svitolina advanced to the quarterfinals of the tournament in Birmingham 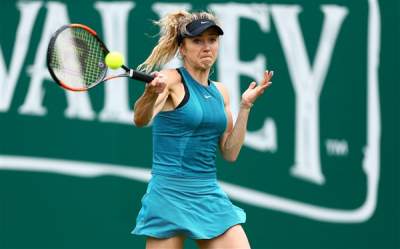 The strongest tennis player of Ukrainian Elina Svitolina won a second victory on the grass courts in Birmingham in the Premier tournament with a prize pool of $885,040.

In the second round, “Birmingham Classic” Svitolina met with the 41st racket of the world from France Alize cornet, whose personal meetings he led 3:2.
The fate of the first set was decided by a single break from Svitolina in the fifth game. In the starting game the Ukrainian player has won 78% of balls with the first ball, which allowed her to completely control the games on her serve.

In the second set Svitolina took all the key draws Elina made two breaks, and on his serve played a five break points. At the end of the match Svitolina at the reception missed two match-Bola, but after a few minutes of peace ended the meeting in their favor.

Elina Svitolina for the first time in his career he made it to the quarterfinals of the grass tournament and the next opponent is fifth racket of the world will be Petra Martic or Michaela Buzarnescu, which the Ukrainian woman lost at Roland Garros.