Home / WORLD / Suspended for not getting vaccinated, Californian ‘Covid nurse since the beginning’ talks to RT

Suspended for not getting vaccinated, Californian ‘Covid nurse since the beginning’ talks to RT 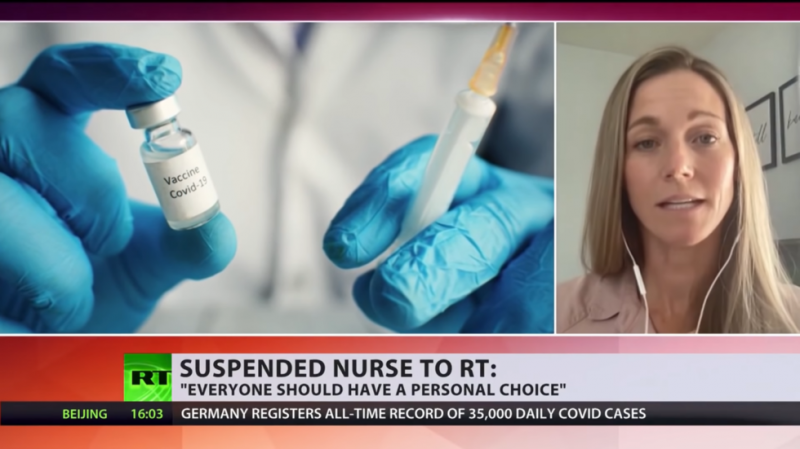 “I made a choice for myself and I think everyone should have the freedom to make their personal choice,” Jensen said of her decision to refuse a vaccine, which is now required for almost all federal employees and those who work for companies with more than 100 employees.

Jensen made headlines this week for posting footage of herself being escorted out of her workplace at Kaiser Permanente Hospital in San Diego, California.

“I don’t know what kind of pandemic it is if they’re firing nurses who are willing to work,” she said in the five-minute video, which has garnered millions of views since hitting social media.

Jensen claims she was put on unpaid leave from her job after she sought a religious exemption in respect of the vaccine mandate, but was refused the opportunity. She didn’t specify her religious beliefs in the video, but in a new interview with RT Jensen says it has to do with her Christian faith.

The hospital, Jensen told RT, believed her application for a religious exemption was “not serious.”

“It’s kind of surreal, honestly, because I love my job and I have been a Covid nurse since the beginning,” Jensen said.

The nurse is one of many who has posted footage on social media of walking away from a job due to the Covid-19 vaccine mandate. She says her decision, however, comes down to simple “medical freedom” and the health worker has no qualms with anyone who received the vaccine.

Many people, she says, did not want to get a vaccine, but felt “pressured to do so,” over concerns about potentially losing their livelihoods.

President Joe Biden and US health officials have continued to warn that mass vaccination is the only way through the pandemic, and the World Health Organization (WHO) recommends the same. Over 58% of people in the US are fully vaccinated, according to the Centers of Disease Control and Prevention (CDC).

In her original video, Jensen said she was not given answers by her hospital’s human resources department over why her religious exemption was not accepted.

“I want all of you to count the cost. I want to watch this and think ‘What really matters to me?’ Because I’m willing to risk my safety and security, my house – everything – for my freedom, and I want you to think about that,” she said in the video, which quickly spread among vaccine-mandate critics. Multiple other nurses in the video expressed their disagreement with the decision to let Jensen go.

The nurse’s hospital has responded to Jensen’s video by claiming she may have been trying to use a loophole in the mandate by seeking the religious exemption.

“We were notified by some of our labor partners and others of open, online discussions around ways to avoid the vaccine mandate by misusing the legitimate religious exemption process,” Dr. Andrew Bindman, Kaiser Permanente’s chief medical officer, said.

He went on to claim that staff applying for religious exemptions were turning in requests that “similar or nearly identical requests containing language taken word-for-word from free and paid templated online forms.”