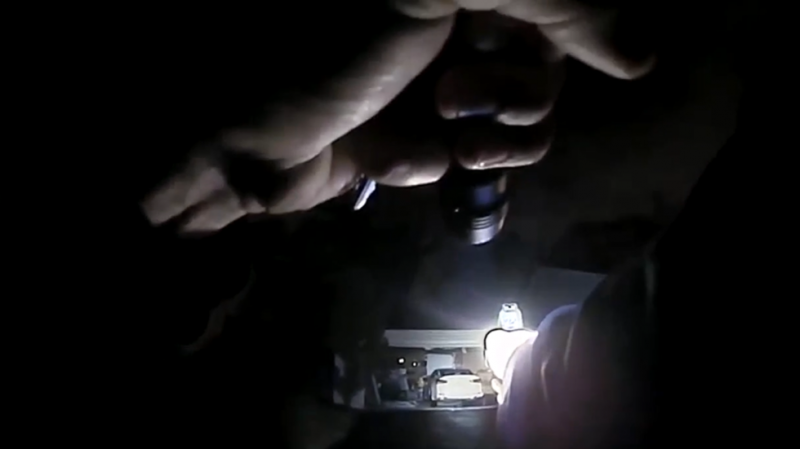 Bodycam footage released by the city on Wednesday shows Columbus cop Adam Coy, a 19-year veteran of the force, and another unidentified officer as they responded to a call early on Tuesday, purportedly about a man behaving strangely in a residential neighborhood.

Upon arriving at the scene, the officers found Andre Hill, 47, standing in a garage. The man is seen taking several steps toward Coy while holding a cell phone – but seconds later, Coy raises his gun and fires on Hill, who immediately collapses to the ground, later dying of his injuries. No weapons were found at the scene.

Because Coy did not activate his body camera until after the shooting, the first moments of the fatal encounter lack audio and do not reveal what was said between the two men. The police cameras have a built-in “look-back” feature which captures video, but not sound, 60 seconds before the device is engaged by an officer. Police also noted there is no dashcam footage of the incident because the call was “non-emergency.”

Andre Hill is seen holding a cell phone seconds before he was fatally shot by a Columbus officer, December 22, 2020. ©  Columbus Police

While the Ohio Bureau of Criminal Investigation has opened a probe into the shooting and will investigate possible civil rights violations, Columbus Mayor Andrew Ginther has condemned the officers for a “stunning disregard for life,” pointing to the fact that none at the scene attempted to render aid to Hill as he succumbed to his injuries.

“It is simply an unexplainable loss,” the mayor said during a press conference on Wednesday. “None of the officers initially at the scene provided medical assistance, no compression on the wounds to stop the bleeding, no attempts of CPR, not even a hand on the shoulder or an encouraging word that medics were en route.”

According to Columbus Police policy, officers are required to offer “appropriate aid and/or summon emergency medical services… as soon as it is reasonable and safe to do so.”

Though few other details about the encounter have emerged, including exactly what Hill was doing at the time of the shooting, Ginther said he was “an expected guest” at the residence and “not an intruder.” He also called on Police Chief Thomas Quinlan to suspend Coy, who has since been placed on administrative leave.

Coy, 44, has a history of complaints regarding excessive force, according to the Columbus Dispatch, which previously reported the officer had at least nine complaints against him since 2003. The city was also forced to pay a $45,000 settlement to a drunk driving suspect in 2012 after dashcam footage showed Coy repeatedly “banging the driver’s head” on the hood of his squad car during the arrest. An internal police review deemed his actions “excessive for the situation.”

An official police report on the Hill shooting was released earlier on Wednesday, but the document is brief and short on details, saying only:

Officer discharged his firearm upon confronting Mr. Hill. Mr. Hill did not survive his injuries.

US Attorney David DeVillers said his office will review the case alongside the state Bureau of Criminal Investigation and consult with the county prosecutor’s office on how to proceed. DeVillers is also currently leading an inquiry into another fatal shooting of a black suspect in Columbus, that of Casey Goodson, who was killed by a Franklin County sheriff’s deputy earlier this month. Goodson’s death has also sparked allegations of civil rights abuses and excessive force, as well as heated street demonstrations by local activists.