Home / Video news / Students and scientists of Kiev held a fancy dress for the March of science. Video

Students and scientists of Kiev held a fancy dress for the March of science. Video 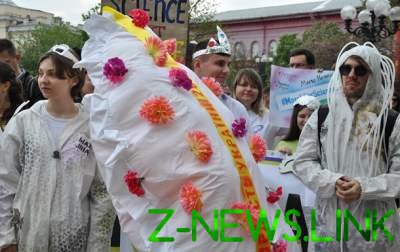 Similar actions took place in other cities around the world.

In the centre of Kiev, a few hundred scientists and activists went on the March for science.

The March was from the Kiev National University. Shevchenko to independence square. The event took place in Kiev simultaneously with similar actions worldwide.

“Scientists say that the government should accelerate the process of reforming the scientific sphere. In particular to launch the work of the National research Fund, which as of 2019 should start grant support to scientific research and development”, – stated in the message.

Also during the campaign, researchers conducted performance – “launched” in the space of a dumpling, but it didn’t.

“Are we going in Ukraine to be proud of scientific achievements, or will we only be proud of the dumplings?”, – a rhetorical question asked by scientists during the campaign.