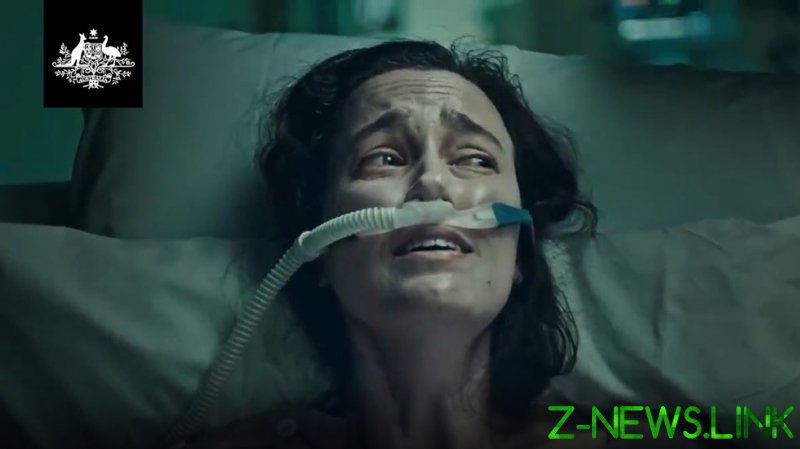 The graphic ad, which is set to run in Sydney – the largest city in Australia, and the one hit hardest by Covid – shows the woman panting with tears in her eyes as she is hooked up to a respirator in hospital. “Covid-19 can affect anyone. Stay home. Get tested. Book your vaccination,” the ad concludes.

Many Australians were quick to criticize what they deemed to be an inappropriate government ad, given Prime Minister Scott Morrison’s failure to secure enough Covid-19 vaccines for the entire population, and recent coronavirus blunders.

“Completely offensive to run an ad like this when Australians in this age group are still waiting for their bloody vaccinations,” protested 10 News First’s National Affairs Editor Hugh Riminton, while Guardian Australia’s Associate News Editor Josephine Tovey called the ad an “insult.”

One social media user described “everything about” the ad as “insensitive and offensive,” while Australian author Anna Spargo-Ryan declared, “How dare the government put the blame for this back on the individual. They’ve stumbled at every possible systemic hurdle: forced poverty, vaccine scarcity, vaccine hesitancy, hotel quarantine…”

Though Australia has been one of the countries least affected by Covid-19, the spread of the Delta variant and the Australian government’s failure to purchase enough vaccines has led to an increase in cases and concern that the country is far less prepared to combat the virus than others.

Morrison has defended the Australian government’s vaccination rollout, claiming it is only a few months behind schedule and saying a more advanced vaccine rollout would not have stopped cases from rising in Sydney.

According to the Australian Department of Health, only those aged 40 and above are currently eligible for vaccination, with an exception for Aboriginal people, carers, critical workers, and other vulnerable people or people in close proximity to the vulnerable.

Australians aged 18 and above are permitted to receive the AstraZeneca vaccine if a medical professional approves, but most countries have warned against the distribution of AstraZeneca’s vaccine to young people due to concerns over its side effects, which can include rare potentially deadly blood clotting.

Morrison was lambasted this past week after it was reported that the government had secured a “game-changing deal” with Pfizer for vaccines, only for Pfizer to come out and reveal that the number of doses being sent to Australia had not changed. Some Pfizer doses will, however, arrive in Australia sooner.

Morrison was also criticized after he appeared to suggest that the UK had vaccinated the majority of its population with AstraZeneca and not Pfizer or Moderna, when in fact the UK commonly uses all three, with only Pfizer and Moderna used for under 40s. The UK is also preparing to use Johnson & Johnson’s vaccine later this year.