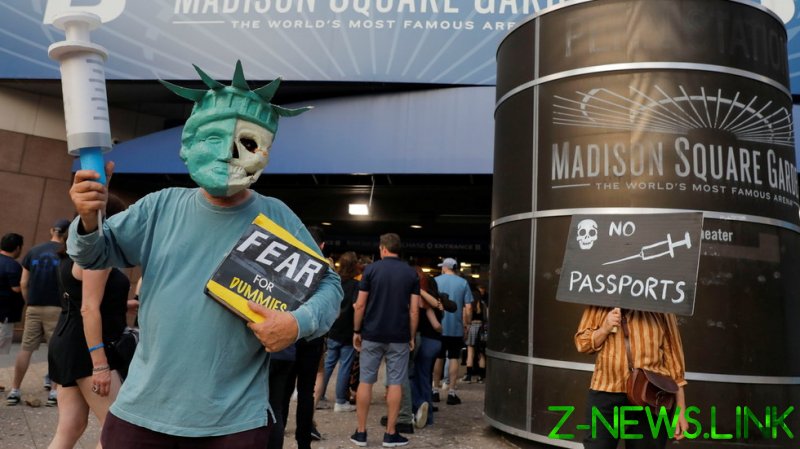 “If states that take federal money for elections feel the need to make residents verify a piece of information as private as their vaccination status just to return to normalcy, then they should have no problem requiring people to prove they are who they say they are when they go to vote,” Cramer said, adding that his proposed legislation “would ensure those states are being consistent about their identification requirements and shine a light on those who hypocritically oppose Voter ID laws but support vaccine passports.”

Cramer’s bill has not been formally introduced in the Senate, as he is looking for co-sponsors. He said he intends to introduce it both as a standalone law, as well as an amendment to the upcoming $3.5 trillion spending bill – where it stands no chance of being adopted, as the Democrats plan to pass it without any Republican votes, or even a debate.

On Tuesday, New York City announced that it would be requiring a ‘Key to NYC’ pass for entry into restaurants, gyms and entertainment venues. The Democrat-run Big Apple is the first US city to do so, and there is much media speculation that other jurisdictions across the country may follow suit.

No US state has introduced the European-style vaccine passport yet, and 20 – including Cramer’s own North Dakota – have outright banned them. The issue has become polarizing and politicized in the US, with Democrats overwhelmingly supporting vaccine and mask mandates and Republicans by and large opposed.

One exception seems to be Kim Janey, the Democrat mayor of Boston, Massachusetts. Saying that requiring people to show their papers raises uncomfortable parallels with the era of slavery, Janey argued that vaccine passports would “disproportionately impact BIPOC [black, indigenous or people of color] communities.”

Even after getting criticized by fellow Democrats on the city council, Janey persisted, arguing that such mandates would threaten “equitable public health and economic recovery.”

Republicans like Cramer point out that Democrats require vaccine papers while denouncing voter ID as racist. The Biden administration actually sued Georgia in June, claiming the election integrity bill passed in March was racially motivated because it required voter ID for mail-in ballots, among other things.

Polls show voter IDs to be overwhelmingly popular with most Americans. Meanwhile, the most recent polling on vaccine passports showed a slim majority in favor when it came to air travel or events with large crowds, but strong opposition in case of workplace access, hotels or indoor dining. However, that poll was conducted in April – months before the Biden administration reimposed masking requirements, citing the spread of the Delta variant of Covid-19 even among the vaccinated Americans.