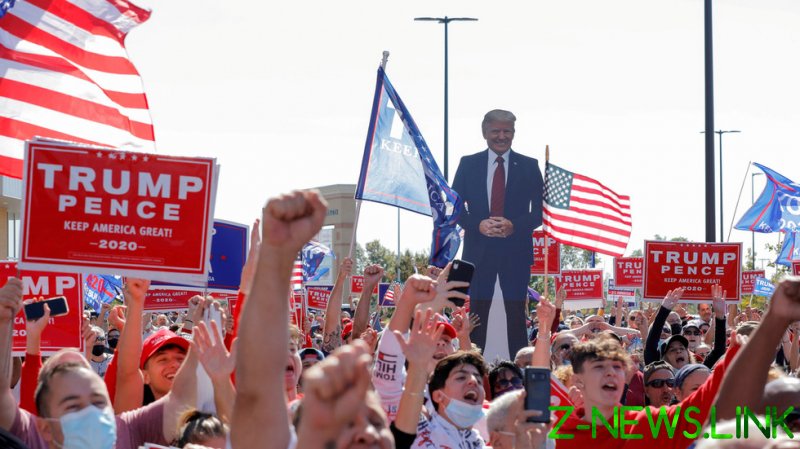 Staten Island GOP chairman Brendan Lantry told the New York Post on Saturday, that the webpage where those willing could sign up for the “TRiUMPh Rally”, billed as a free event, was overwhelmed by thousands of users with suspicious names such as “F**k you Trump” and “Ivana Punchyou” ahead of the October 3 rallly.

Upon a short investigation, Lantry said that they managed to trace the source of the avalanche to a TikTok video by an anti-Trump Brooklyn blogger, who claimed that she had “reserved two seats”, but was not going to show up.

“Do you hate this orange b*tch as much as I do?…So, do what you want with this information,” blogger “Felisrae” reportedly said in the video, viewed over half a million times.

The call, apparently, did not fall on deaf ears, with Lantry claiming that the surge in those signing up came from out of state, including from California, Chicago, Houston and Colorado.

In a bid to stem the flood of saboteurs, the party decided to put a $5 fee on a non-refundable sign-up form, Lantry said, adding that the tactic, however, did little to discourage the presumed TikTokers. Over 3,000 people had shed $5 by the time the rally was held in a commercial parking lot in Charleston on the island’s South Shore, he said.

Some 2,500 people turned out at the outdoor no-seats event, many carrying Trump/Pence signs. The video from the rally showing the gathered chanting “Four more years” and “USA” ended up going viral, having been shared by VP Mike Pence and other prominent Republicans as well as many critics, who saw the rally as a potential super-spreader event.

Lantry, however, deemed the rally a success, extending his graduated to “progressives” for “helping us put on a successful rally.”

“They hate this president so much that they’re willing to donate to the Republican Party to troll him,” he told the Post.

The same tactic used by the Trump detractors seemingly borne fruit in Oklahoma, when some 6,000 people showed up to the 19,000 – seat capacity theater for a US President Donald Trump rally in Tulsa in July.

There are different theories as to what caused the meagre turnout. Then chairman of Trump’s reelection campaign Brad Parscale claimed that the campaign had received 1 million ticket requests and blamed the low number on anti-Trump demonstrations outside the venue.

However, TikTok users took credit for the debacle, having earlier posted videos of themselves requesting tickets for the event, but then sarcastically saying they won’t be able to make it.