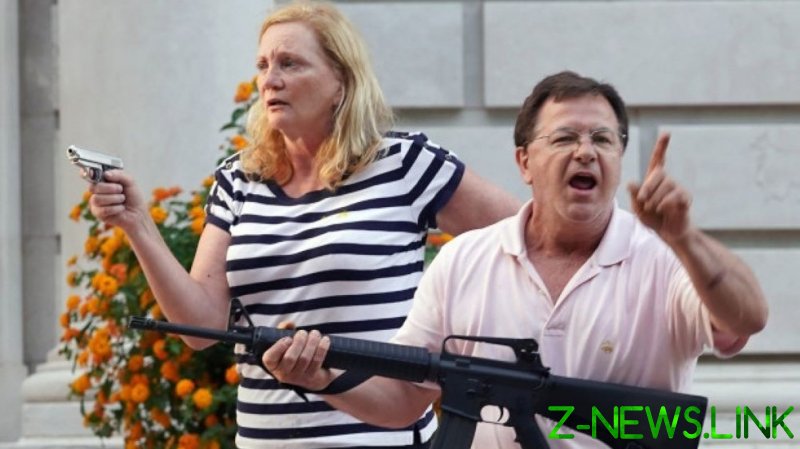 Jurors agreed to indict the McCloskeys on Tuesday for unlawful use of a weapon and evidence tampering, the St. Louis Post-Dispatch reported, citing the couple’s lawyer. The felony indictments essentially mean that jurors found probable cause that the McCloskeys were guilty of the weapons violations, as charged by St. Louis Circuit Court Attorney Kimberly Gardner in July, and expanded the case to also include evidence tampering.

With the indictments secured, Gardner won’t need to go through a preliminary hearing to convince a judge that there is enough probability of guilt for the case to proceed to trial. The evidence-tampering charge apparently concerns the pistol that Patricia McCloskey waved at protesters. She claimed that the pistol was inoperable when she surrendered it to police after the incident. However, it was reported that Gardner’s staff ordered the police crime lab to take apart and reassemble the gun to make the otherwise out-of-service weapon capable of “lethal use.”

McCloskey’s attorney, Joel Schwartz, at the time accused the prosecutors’ office of tampering with the evidence to charge the couple. “It’s disheartening to learn that a law enforcement agency altered evidence in order to prosecute an innocent member of the community,” Schwartz said back in July.

The charges stem from a June 28 incident that has sparked a firestorm of controversy over the rights of citizens to defend themselves in the age of Black Lives Matter protests. The McCloskeys said demonstrators broke through their neighborhood’s iron gates, trespassed on their property and threatened to burn their house down and kill them and their pets. Protesters said they came through an unlocked gate and marched past without going onto the McCloskeys’ property.

Mark McCloskey told reporters earlier on Tuesday that while none of the demonstrators was charged with trespassing, he and his wife – both lawyers in their early 60s – face felony charges that “could cost us four years of our life and our law licenses.” He said they are being persecuted “because we had the gall to protect our home and our family against the mob.”

Missouri Governor Mike Parson, a Republican, said at the time Gardner’s charges were announced in July that he would pardon the McCloskeys if they were convicted. President Donald Trump and Senator Josh Hawley, a Missouri Republican, have also defended the couple, with Hawley asking the Department of Justice to open a civil-rights investigation. The McCloskeys even spoke at the Republican National Convention (RNC) in August.

Democrats, such as television writer Knell Scovell, cheered the grand jury indictments. “Indicted – and that’s why they fit in perfectly at the RNC,” Scovell tweeted. Author and Young Turks host Adrienne Lawrence tweeted sarcastically about the McCloskeys potentially losing their law licenses: “That’d be a shame.”