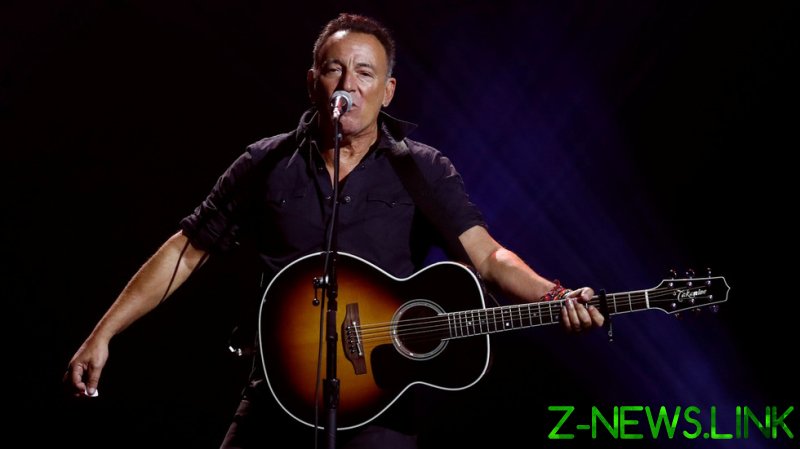 To say Springsteen doesn’t like Trump might be a bit of an understatement. The ‘Born in the USA’ singer was so against the former president that he ‘joked’ he’d leave his beloved country if he was reelected.

“If Trump is reelected – which he will not be; I’m predicting right now he’s gonna lose – if by some happenstance he should be, I’ll see you on the next plane,” he told an Australian press outlet in October.

On his SiriusXM radio show during the same month, Springsteen called for “an exorcism in our nation’s Capitol” and described Trump’s presidency as a “f**king nightmare” and promised that “we’ll be throwing out the bums.”

This is the man Jeep decided was best to pitch the US a message of unity following a heated, contested election – and in the same week that a former president is about to go through a Senate impeachment trial.

In his somber ad, Springsteen croaks and slaps on a cowboy hat and talks up finding a way back to “the middle.” He also interestingly ends his diatribe by introducing the “ReUnited State of America.” Were we not the US while Trump was president?

To Springsteen and others with Trump hatred that runs so hot and deep in their veins that they are blindly loyal to a career politician and war hawk like Biden, we were not.

“We need the middle. We just have to remember the very soil we stand on is common ground. So we can get there. We can make it to the mountaintop. Through the desert. And we will cross this divide. Our light has always found its way through the darkness. And there’s hope. On the road. Up ahead,” Springsteen says in the commercial.

The musician’s own history of political rhetoric made it hard for at least some to buy his message as authentic.

“Virtue signaling at its worst,” writer Christian Toto tweeted in reaction to the ad.

We are less than two months into 2021, and it’s become crystal clear from liberal politicians, talking media heads, and cultural figures that unity is not in the cards, but that doesn’t stop them from trying to make the phony sell, just as Springsteen did on Sunday night.

The truth is, unity doesn’t mean the same thing to folks like Springsteen, who were all-consumed with bitter hatred while Trump was in office. To them, the Republican’s removal has a quality that is almost spiritual (which makes sense since Springsteen reportedly looked at his Jeep commercial as “prayer.” Yes. A Jeep commercial). The unity they are calling for does not include anyone who voted for Trump or chose not to cast a ballot for the highly questionable Democrat running against him, who is now running the country and doing a great job, according to his supporters because, you know, he’s not Trump and we don’t have to read any mean tweets on the weekend!

No more pretending calls to reunite or meet in the middle from the left are meant for anyone other than those who already agree with them completely. Springsteen may think he’s handing an olive branch to the other side, but that’s just acting. He’s really introducing us to the world he and every other liberal wants: the ReUnited States of America, a reboot they hope includes more punishment against Trump and anyone deemed even close to being one of his supporters.

Springsteen and other artists truly want to unify over their hatred of those they are politically aligned against. That’s their middle. The unity isn’t for the rest of us. No matter how much they pretend it is.