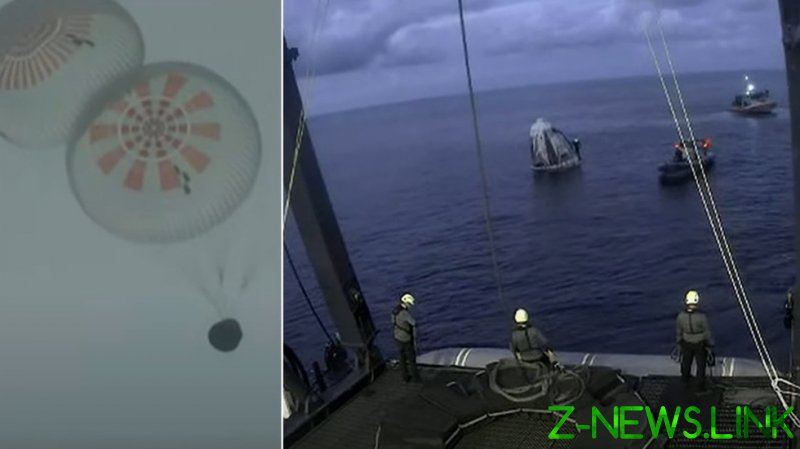 The spacecraft, dubbed Resilience, parachuted into the sea shortly after 7pm ET. A fleet of SpaceX rescue ships was deployed nearby to pick up the craft and its crew.

The Inspiration4 made history as the world’s first ‘all-civilian’ space mission, and marked SpaceX CEO Elon Musk’s debut in the space tourism industry.

Though none of the crew are professional astronauts, all have undergone months of training to prepare them for the rigors of the mission.

The quartet orbited the Earth for three days at an altitude of 575km (360 miles), around 150km higher than the International Space Station.

Inspiration4 follows  two high-profile private space flights in July by Amazon tycoon Jeff Bezos and Virgin magnate Richard Branson. Bezos flew to the edge of the Earth’s atmosphere aboard the New Shepard rocket and capsule, designed by his company, Blue Origin. Branson, who beat Bezos to launch by little over a week, flew a lower suborbital flight aboard Virgin Galactic’s Unity 22 spaceplane.

However, neither Bezos nor Branson actually orbited the Earth during their flights, thus Inspiration4 is the first fully private mission to carry humans into orbital space, a domain that was once the sole preserve of the world’s superpowers.