‘Space Jam: A New Legacy’ is dismal proof that LeBron James will never be Michael Jordan 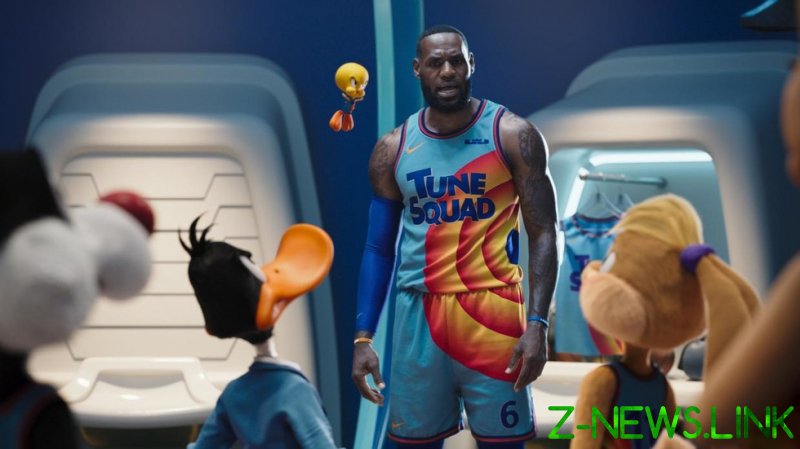 ‘Space Jam: A New Legacy’, starring LeBron James, arrived in theaters and on the HBO Max streaming service on Friday.

The movie, a sequel of sorts to Michael Jordan’s 1996 blockbuster ‘Space Jam’, tells the story of LeBron and the Looney Tunes characters having to win a basketball game against the villain Al-G Rhythm (Don Cheadle) and the Goon Squad, a team of computerized NBA and WNBA superstars, in order to save his family from some sort of eternal damnation.

It should come as no surprise considering LeBron’s meticulous, corporatized self-promotion in recent years, from his vociferous support of Black Lives Matter to his pandering to China, that ‘Space Jam: A New Legacy’ is nothing but a relentless and shameless two-hour commercial for the LeBron brand and Warner Brothers’ intellectual property.

The original ‘Space Jam’ was wildly popular back in 1996, raking in $250 million at the box office, no doubt because Michael Jordan was such an iconic and beloved figure at the time.

‘Space Jam: A New Legacy’ is no ‘Space Jam’. Watching Space Jam 2 is the cinematic equivalent of stepping barefoot in a pile of dog mess baking on a sidewalk during a heatwave. It’s so bad it makes the entertaining but middling original look like a cross between ‘Citizen Kane’ and ‘Star Wars’.

The biggest problem with Space Jam 2 is that LeBron James, no matter how hard he tries – and he tries very hard indeed – is no Michael Jordan. Jordan had an undeniable magnetism to him, both on and off the court. Even basketball fans who loathed the Bulls still loved and admired Jordan back in the day. The same cannot be said of LeBron, who is a much more polarizing figure, and whose game, while stellar, is considerably less aesthetically pleasing than Jordan’s. It also doesn’t help that LeBron doesn’t have the movie star good looks or charisma of Jordan either.

There’s no denying his greatness on the basketball court, but LeBron is not exactly Le Brando in front of a camera. For someone who has spent their entire adulthood being filmed and who does copious amounts of acting on a basketball court, it’s stunning to behold how painfully uncomfortable LeBron is on screen. They would’ve been better off casting a cigar store Indian in the lead role, as LeBron is so wooden in Space Jam 2 he should be checked for termites.

LeBron is certainly a big problem for the movie. But he isn’t the only problem.

The film’s director, Malcolm D. Lee, is Spike Lee’s cousin, and his work on Space Jam 2, and his previous filmography, speak volumes to the insidiousness of nepotism.

‘Space Jam: A New Legacy’ also boasts a budget of over $150 million and yet remarkably appears decidedly low-rent, as the 3-D versions of the Looney Tunes characters look like unconscionably cheap amusement park mascots.

And then there is the nadir of the film, the Porky Pig rap, about which the less said the better.

Space Jam 2 is supposedly made for kids, but even for them the movie is emotionally, narratively and comedically incoherent. It’s also littered with references they’ll never understand. For instance, there’s a bit about Indiana Hoosiers basketball coach Bobby Knight throwing a chair at a ref, something that happened in 1985. There’s also a plethora of references to older Warner Brothers’ intellectual property, like ‘Casablanca’, ‘Mad Max’, ‘Austin Powers’, ‘The Matrix’ and ‘Training Day’ – not exactly stuff a ten-year-old will understand or even care about.

And despite all of that awfulness, my overwhelming feeling at the end of ‘Space Jam: A New Legacy’, was that I actually felt bad for LeBron. I know that is idiotic, as I’m just some clown reviewing his movie and he is a billionaire basketball god and burgeoning movie business impresario. But it’s true.

What struck me was that LeBron making a blatantly self-reverential, hagiographic movie – where everyone tells him he’s the greatest basketball player ever, and where he incessantly declares what a tough upbringing he had, how hard-working and disciplined he is, and what a devoted father and family man he is – is not a testament to his ego, but rather a monument to his insatiable insecurity and need to be loved. This is the inverse of Michael Jordan, who was loved and validated by fans because he never needed their love and validation.

LeBron has everything…NBA titles, Hall of Fame credentials, millions of dollars, adoring fans, a great family and yet he still desperately needs validation. He left Cleveland for Miami in search of it. He left Miami for Cleveland looking for it. He left Cleveland again and came to LA on his quest. He embraced Black Lives Matter hoping for it. He sold his soul to China in an attempt to attain it. And now he tries, once again, to mimic Michael Jordan by making Space Jam 2 in the hope of securing it. But for LeBron, validation will remain ever elusive.

‘Space Jam: A New Legacy’ is not going to make anyone who watches it feel good, including LeBron James. The movie may fill his pockets with money but it won’t make him feel loved because it can’t change the fact that he isn’t Michael Jordan, and he never will be.