Social networks have fun an embarrassment, Putin and Erdogan chair 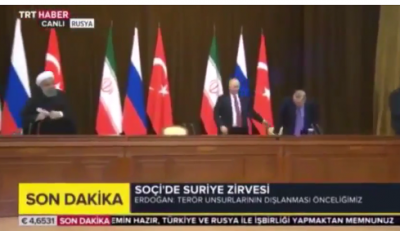 Putin gave another reason for ridicule.

The incident occurred on November 22, during a joint press conference with Putin, Erdogan and Iranian President Hassan Rouhani in Sochi.

After you speak to the press after the trilateral talks, Putin stood up, shook hands with Erdogan risers and pushed back from his chair, after which he fell with a crash.

In the broadcast of Turkish television shows that after the fall of the chair immediately raised a man in civilian clothes.