‘So proud to have a woman justifying mass murder!’ Sec. Blinken roasted for calling Madeleine Albright his ‘role model’ 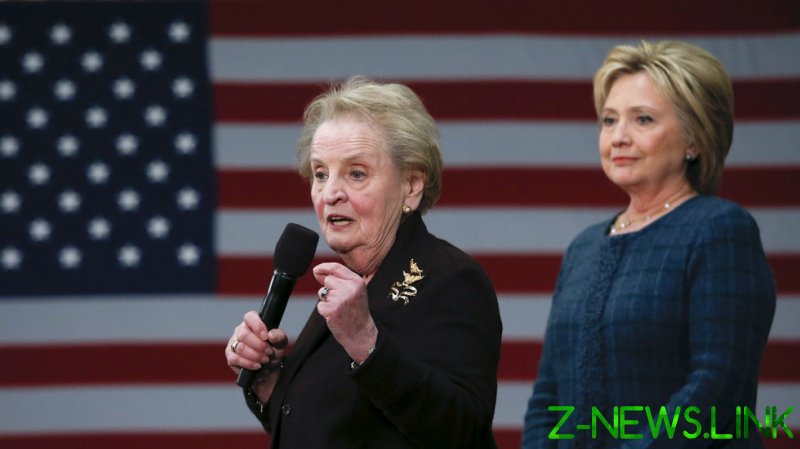 Blinken took to Twitter on Friday to hail Albright, former US ambassador to the UN and US Secretary of State under President Bill Clinton as a “women of courage.”

“During her diplomatic career as U.S. Ambassador to the UN & the first female Secretary of State, her tenacity & effectiveness left the U.S. stronger & more respected globally,” Blinken tweeted, adding that Albright is a “role model” for him and “some many of our diplomats.”

The choice of an example to follow has struck many as odd. The replies were inundated with the clip of Albright’s famous 60 Minutes interview with Lesley Stahl, in which Albright said that the death of an alleged half million Iraqi children due to the US sanctions was “worth it.”

“Albright, yourself, and your predecessor Pompeo all prove that the US only chooses literal psychopaths to head the State Department,” Independent Australian journalist Caitlin Johnstone tweeted, calling the US State Department “America’s other war department.”

“So proud to have a woman justifying mass murder! Neoliberal imperialism. It’s like the slow-boiling lobster. People don’t realize it until it’s too late,” a self-professed anti-fasciest and BLM supporter said.

Another critic argued that with his praise for Allbreight the US top diplomat “at least” admitted that imposing sanctions that might cause children to suffer is what US officials deem “role-model behavior.”

A user has suggested Blinken might have easily eschewed controversy by “simply” going for a “non-war criminal” for his role model pick.

Albright later criticized Stahl’s interview, claiming that she unwittingly fell into a trap planted by the journalist and did not mean to suggest that Iraqi children are dispensable. However, the massive backlash that she faced in the wake of the segment appeared to bear little influence on her views on the issue of sanctions as a whole. Asked at an event in Charlottesville in 2012 about the US sanctions on Iran, Allbright outright rejected the parallel with Iraq, saying that they were “absolutely not the same.”

Albright’s notoriety also stems from her being considered one of the most outspoken champions of the 1999 US-led NATO bombing of Yugoslavia over alleged atrocities against ethnic Albanians in Kosovo.

Albright has also been faulted for blocking the UN peacekeepers from intervening in Rwanda genocide among other things.

Most recently, the former US diplomat courted controversy for saying that there is “a special place in hell for women ” who do not support then presidential candidate Hillary Clinton.